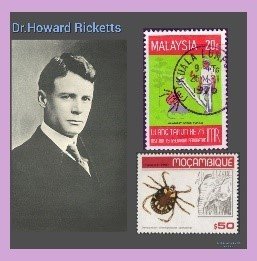 🔸Ricketts studied medicine and graduated from Northwestern University of Medical School in United States. Subsequently, he had taken a professional training in Vienna and in Pasteur Institute at Paris.

🔸He joined as a faculty at the University of Chicago and started his career by studying blastomycosis. Further his interest in immunology motivated him to publish a book called “Infection, Immunity and Serum therapy.”

🔸In early 1890, he spent around four years in laboratory and the field, particularly, to investigate the highly fatal Rocky Mountain Spotted Fever.

🔸Earlier this fever was called “Black Measles” in United States, because of it characteristic rashes.

🔸Thereafter, Dr. Ricketts made a breakthrough by isolating the microorganism in the blood of victims and discovered the mode of spread by the vector ticks.

🔸Further in 1910, he focused on Epidemic Typhus Fever during the outbreak in Mexico.

🔸Consequently, he discovered that Epidemic typhus was getting transmitted by the body louse and also identified the disease-causing organism both in the blood of the victim and in the bodies of the lice.

🔸He was devoted to his research and used to inject himself with pathogens to measure the effect on several occasions. Unfortunately, he died during his research by contracted typhus at the age of 39 years.

🔸Additionally his family members established “The Howard Taylor Ricketts Prize” for the students, who present the best of research in bacteriology at the University of Chicago.

The Most Courageous and Devoted Physician