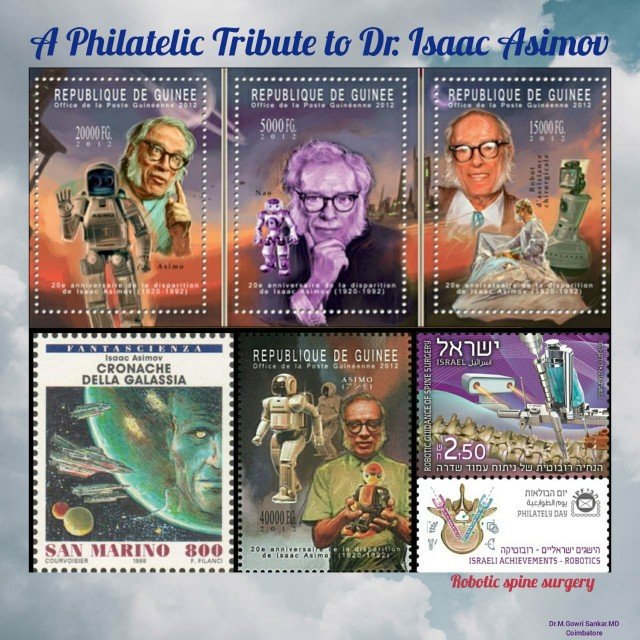 🔸Asimov was born in Soviet Russia. When he was 3 years old, his family immigrated to New York.
🔸There, his father started a candy shop and Asimov spent most of his time helping his parents. Then, his father started selling newspapers and magazines in the candy shop. Thus, Issac was influenced by science fiction magazines.
🔸At the very young age of eleven years, he began to write his own stories and few years later he was selling them to magazines.
🔸Due to anti-semitism, Asimov was rejected twice to join in medical schools. Thus, he studied Chemistry at Columbia University in 1939 and completed his Master in chemistry and earned Ph.D. in chemistry in 1948.
🔸In between his studies, he spent his three years working as a chemist during World War II at Naval Air Experimental Station in U.S. Army.
🔸After completing his doctorate, he joined as the faculty of Biochemistry at the Boston University School of Medicine in 1949, where, he remained associated and was promoted to Professor of Biochemistry in 1979.
🔸He is best known for his works of science fiction and for his popular science books.
🔸Actually, he began contributing stories to science fiction magazines in 1939 and published his first science fiction novel in 1950.
🔸In fact, he was the first to imagine and create Robot and its laws to serve the human. Then he published his series of Robot stories and compiled the novel I, Robot in 1950. There he coined the term Robotics.
🔸He wrote many books on various subjects beyond science fiction – on topics such as astronomy, biology, maths, religion and literary biography.
🔸Further, he wrote several essays and novels on the social contentions of his day and on environmental crisis such as global warming, the destruction of the ozone layer and the acidification of the oceans.
🔸During his career, he wrote and edited around 500 books and penned myriad stories, articles and essays. Moreover, he published his two volumes of autobiography – It’s Been a Good Life.
🔸The medical teacher and the science fiction writer was honored by naming – the Asteroid 5020 Asimov; the magazine Asimov’s Science Fiction; Isaac Asimov Awards and the Honda company, which has one of world’s advanced humanoid robots named as ASIMO.
🔸His imagination and creation of robots and robotics led to significant advancements in various fields including medicine. During 1985, the first robotic surgery was initiated in the laparoscopic procedure and today it has became a successful option in various surgical procedures.

One of the Most Prolific Writers of 20th Century