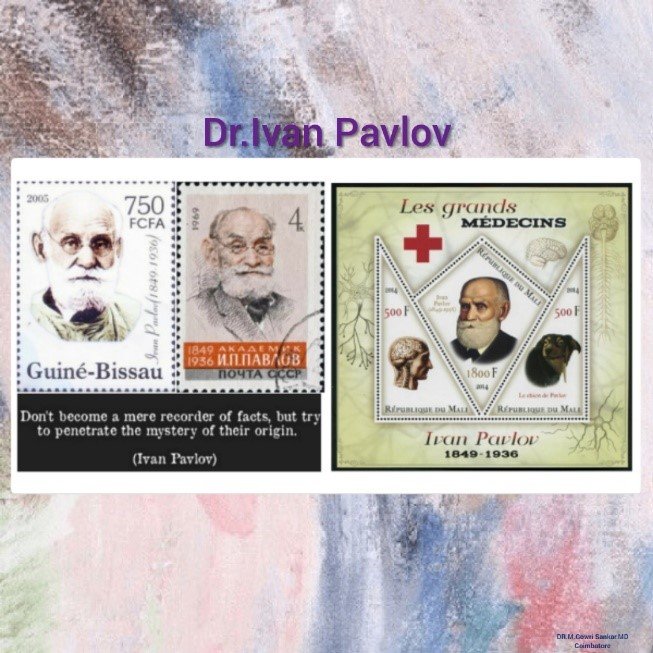 🔹Ivan Pavlov studied Physics and Mathematics at the University of Saint Petersburg. During his fourth year, his first research project on The Physiology of the Nerves of the Pancreas won him a prestigious University award.

🔹Due to his overwhelming interest in Physiology, he continued his studies and received his MD from the Imperial Academy of Medical Surgery.

🔹After completing his Doctorate, he visited Germany and studied further under the famous Cardiovascular Physiologist Dr. Carl Ludwig and the Gastrointestinal Physiologist Dr. Rudolf Heidenhain.

🔹Subsequently, he became a Professor at Imperial Institute of Experimental Medicine in Saint Petersburg in 1891 and then organized an exclusive Department of Physiology. He continued there till 1924.

🔹In fact, his first independent research was on the physiology of the circulatory system. There he investigated the cardiac physiology and the regulation of blood pressure. He then introduced the femoral artery catheter and recorded the influence on blood pressure of emotional stimuli as well as of various drugs.

🔹Pavlov also did a bulk of research on the physiology of digestion. But he became well known for his wonderful discovery of Classical Conditioning or learning by association. It was an experiment which involved a Dog, Food and a Bell.

🔹Here, Pavlov introduced the food to dog with the ringing of a bell. He found that the ringing of the bell triggered salivation in dog, even in the absence of food.

🔹After his experiment, Pavlov proposed that the conditioning involved the connection between brain centres for conditioned and unconditioned stimuli.

🔹Consequently, Pavlov’s discovery made a reverberating influence on psychology. Further, his discovery of classical conditioning had a great impact on other scientists and led them to contribute significantly to the development of behaviourism.

🔹Furthermore, his work paved the way for Behaviour therapy or Clinical psychotherapy.

🔹Eventually, he became the first Russian scientist to be honoured with Nobel Prize in Physiology and Medicine in 1904 for his work on digestive secretions.

A Physician Who Explored the Mysteries of Behaviour