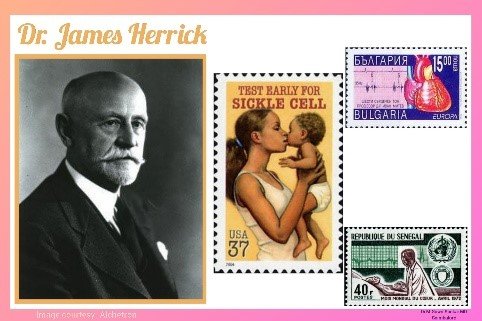 🔸Herrick studied medicine at Rush Medical College and graduated in 1882. Then he got trained at varies places such as Vienna, Prague and Berlin.

🔸After completion of his studies, he was appointed as a Faculty at the same Institute and became a Professor in 1900.

🔸He was a great teacher and researcher who made significant contributions to medical science.

🔸In 1910, he was the first who described Sickle Shaped Red Blood Cells on the blood film of West-Indian medical student. He named the condition as Herrick’s syndrome, later called as Sickle Cell Disease.

🔸In addition, he published his landmark article in JAMA about Myocardial Infarction entitled Clinical features of sudden obstruction of the coronary arteries in 1912. Here he provided the first definitive description of the symptoms and manifestations of coronary thrombosis.

🔸Under his guidance and support, Dr. Fred Smith pioneered on ECG abnormalities by experimenting on dogs by ligating coronary arteries. Thereafter, Dr. Herrick strongly advocated the use of electrocardiograph in diagnosis of myocardial infarction.

🔸Furthermore, he published his books – “A Handbook of Medical Diagnosis for Students” in 1895 and “A Short History of Cardiology” in 1942.

🔸Subsequent to his enormous contribution, he declared that… “A true Physician must possess a dual personality that the scientific focus towards disease, the human and humane towards the patient.”