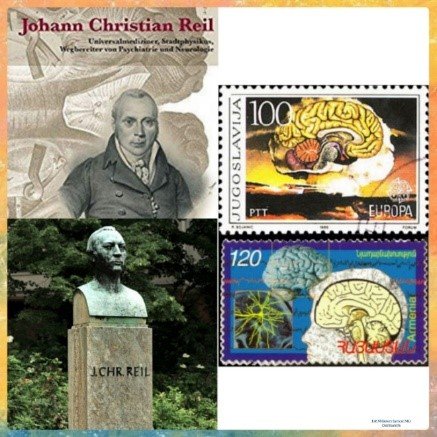 🔸Christian Reil had done his medical studies at the University of Gottingen, Germany in 1779. Subsequently, he got trained in anatomy and surgery under the guidance of Phillip Meckel and medicine under Johann Goldhagen at the University of Helle and completed his graduation in 1782.

🔸He spent most of his life in and around the city Halle, central Germany. He actually started his carrier as a private practice and then became a Director of local hospital and also served as a professor at the University of Halle for about 22 years.

🔸He was Halle’s municipal physician in 1789. In fact, he faced many challenges throughout the ruling years of the French military leader Napoleon.

🔸However, Reil’s reputation had grown enormously and ultimately, he became a leading representative of medicine.

🔸Indeed, he divided medicine into three different fields as Anatomy, Physiology and Psychiatry and he made seminal contributions in all the three fields.

🔸Thereafter, Reil promoted physiology as the proper foundation of medical science. As an academician, he founded the world’s first physiology journal called Archives for Physiology in the year 1795.

🔸Further, he had shown his interest in the field of psychiatry. He had actually argued that psychiatry should be an independent specialty in medicine and the people who were mentally ill, should be treated by very best physicians (Psychiatrist) and particularly in hospitals and institutions.

🔸He also described psychotherapy as an essential treatment for mental and somatic diseases and also launched an anti-stigma campaign and reformed psychiatric asylums.

🔸In 1808, on his publications, Dr. Reil introduced the term Psychiatry and declared that mental diseases were brain disease. Thereby, he ss considered the Founder of German psychiatry.

🔸Dr. Reil was also considered one of the Founders of Neurology. He was the first to describe various anatomical structures in the brain, such as insular cortex, corona radiata, arcuate fasiculus, locus caeruleus in the pons, sulcus circularis, trigonum lemnisci and vallecula.

🔸In order to honour Dr. Reil’s work in brain anatomy, British anatomist Henry Gray, on his ground-breaking first edition of Gray’s Anatomy in 1858, named the Insular cortex as the Island of Reil.

🔸Moreover, he promoted Halle as a center for Balneotherapy, the health spa to treat various ailments.

🔸During Napoleon’s invasion, Dr. Reil volunteered for the military duty and attempted to organise a private hospital in Berlin for the wounded soldier’s. Unfortunately, Dr. Reil contracted typhus and died at the age of 54 in 1813.

The Creator of Psychiatry Medicine