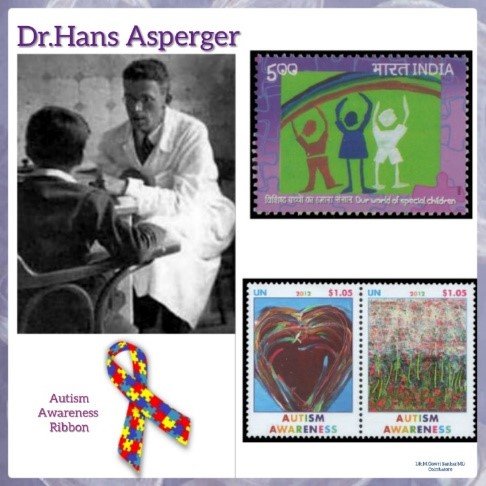 💠Pioneer in the Study of Autism

🔸Asperger was born in Vienna, Austria. He studied medicine at the University of Vienna in 1931 and became the Director of University Paediatric Clinic in Vienna.

🔸During World War II, he served as a medical officer in Yugoslavia. Sadly, he lost his younger brother in war. Near the end of the war, his school, which was built for children, was bombed and destroyed. His sister who was in charge of the school was also killed.

🔸After the war, he continued his studies in children with mental disorder.

🔸Dr. Asperger observed a small group of boys had a different behaviour pattern and abilities. It included a lack of empathy, little ability to form friendships, one-sided conversations, intense absorption in a special interest and clumsy movements.

🔸Asperger believed that this personality is an extreme variant of male intelligence. He often called these children as Little Professors because of their ability to talk about the specific subject in great detail.

🔸Further, he named the disorder as Autistic Psychopathy in Childhood in 1944.

🔸Additionally, Dr. Asperger published more than 300 articles concerning this autistic psychopathy. But his work was largely unnoticed during his lifetime except for a few accolades in Vienna.

🔸After 40 yrs, his studies on psychological disorders got popularised when Dr. Lorna Wing, an English psychiatrist brought out Asperger’s clinical observations in an academic paper as Asperger Syndrome – A Clinical Account.

🔸Also, she renamed Autistic Psychopathy as Asperger’s syndrome in 1981.

🔸Finally, in 1994, the American Psychiatric Association recognized the diagnosis of Asperger’s syndrome in the fourth edition of its Diagnostic and Statistical Manual (DSM) as a separate disorder from autism.

🔸Today February 18 is International Asperger’s Day, which marks the birth anniversary of Dr. Hans Asperger to highlight the significance of Asperger syndrome for individuals and the community.

A Day to Commemorate...