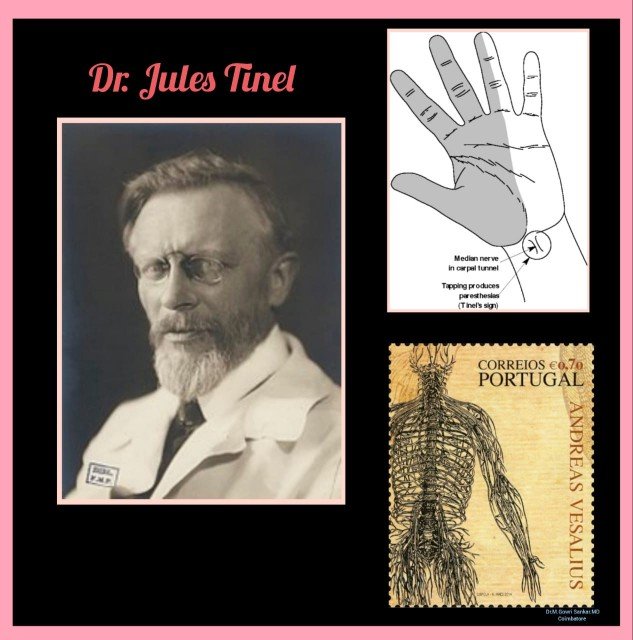 🔹Jules Tinel was born in a family which had raised medical professionals for five generations. He studied medicine in University of Rouen and received his MD in 1910.
🔹While studying, he got inspired by the French neurologist Dr. Joseph Dejerine. Consequently, he did his specialization in neurology.
🔹In 1914, he became the Head of the Neurology in a hospital at Le Mans.
🔹Then during the First World War, he was posted as Assistant doctor in a French military regiment. It was the time when he got interested in finding the consequences of the damage with regard to peripheral nerves as a result of ballistic trauma.
🔹In fact, his research revealed a description of an effect where tapping of the damaged nerve generated paresthesia (tingling sensation). He further explained that tingling is the sign of regeneration of the damaged nerve, still without myelin sheath. Then it was named as Tinel’s sign.
🔹Based on the observation he had done among 693 patients, he published his work.
🔹Simultaneously, Dr. Paul Hoffmann, a German physiologist described the sign as a diagnostic maneuver used to localize the levels of nerve damage and to assess the regeneration after peripheral nerve injury. Hence this sign is also named as Hoffmann-Tinel sign.
🔹Later, Tinels sign was also observed in nerve compression syndrome, such as carpal tunnel syndrome.
🔹Furthermore, he published about the Cutaneous nerves distribution of whole body in 1916.
🔹Additionally, Dr. Tinel was associated with the first description of paroxysmal hypertension in phaeochromocytoma during 1922.
🔹Subsequently, he had done a research on measurement of intracranial pressure and then studied the role of histamin on blood vessels and regulation of blood circulation in brain.
🔹In order to commemorate his life and work, The Jules Tinel award is offered for the scientific advancement of knowledge regarding the human peripheral nervous system, which is the highest award granted by the Association of Extremity Nerve Surgeons, U.S.