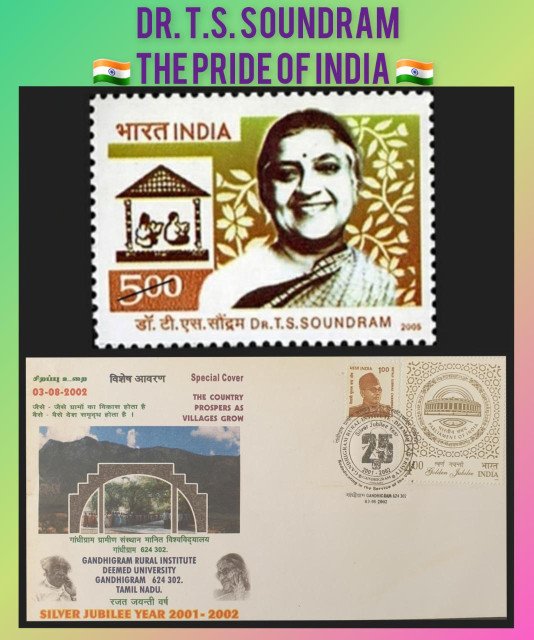 🔹Dr. Soundaram was born in Tirunelveli, Tamil Nadu. She was a daughter of T. V. Sundaram, the founder of TVS Group of companies, which is one of the India’s largest industrial conglomerates.

🔹She got married to Dr. Soundararajan at her very young age of 14 years. Unfortunately, her husband succumbed during the plague outbreak. But he insisted her to become a doctor and also to remarry when he was in deathbed.

🔹Hence she joined to study medicine with the support of her parents at Lady Hardinge Medical College, Delhi and received graduated in 1936.

🔹During her college days, she got an opportunity to meet Gandhiji and dedicated herself to the Indian freedom movement.

🔹Thereupon, she met G. Ramachandran, who was a teacher and intimate disciple of Gandhiji and also an inmate of Gandhi’s ashram. They fell in love and eventually got married in 1940 with the blessings of Gandhiji. In doing so, she broke the barriers of caste.

🔹On their wedding day, Soundaram was privileged to wear a saree made of yarn spun by Kasturba Gandhi and a mangalsutra dipped in turmeric by Gandhiji himself.

🔹After her medical studies, Dr. Soundram got involved in Quit India movement. Gandhi was impressed by her commitment and he appointed her as a representative of South India’s Kasturba Gandhi National Memorial Trust.

🔹Therefore the couple shifted to Dindigul, Tamil Nadu and were instrumental in setting-up the Gandhigram in 1947 for rural development.

🔹Furthermore, she enthusiastically involved herself to focus on healthcare, education, economic development and social welfare in the rural communities.

🔹In 1947, she began a two bedded clinic in a village called Chinnalapatti. Being a visionary, she made the hospital with several inroads into rural health and family welfare. It has now become the 300-Bedded Kasturba Hospital now.

🔹In 1956, they founded “The Gandhigram Rural Institute.” Later it became a Deemed University in 1976. The purpose of building the institute was to uplift Rural Students, People and Villages.

🔹Moreover, Dr. Soundaram entered politics and was elected twice as a MLA and then Member of Parliament – representing Dindigul district in 1962.

🔹Later, she was appointed as the Union Deputy Minister for Education. While in service, she played the main role in making primary education free all over the country.

🔹Consequently, she was honoured for her meritorious social work with Padma Bhushan award in 1962.

🔹In fact, she was born rich but lived a very simple life – possessing only three sets of khadhi sarees, and did selfless service to the underprivileged. Thereby, she became a living example of the Gandhian vision.

A Physician with A Beautiful Mind and Generosity of Heart