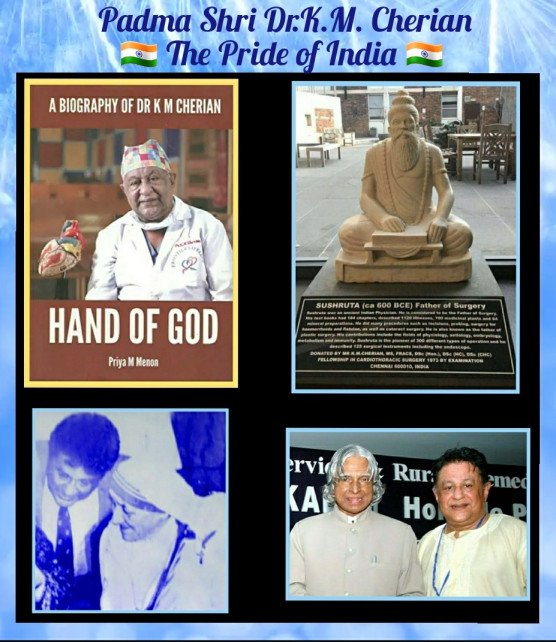 💠Pioneer of Cardiac Surgery in India

🔸Kotturathu Mammen Cherian was born in Kayamkulam, a small town in Alapuzha district of Kerala. His father was an employee in a tea estate and his mother a home maker and they lived on the hills of Munnar.

🔸He studied medicine at Kasturba Medical College, Manipal in 1964 and completed his MS Surgery in the same institute. He started his career as lecturer in surgery in Christian Medical College Hospital, Vellore in 1970.

🔸Also, he got an opportunity to work with famous cardiac surgeons in New Zealand and United States. He refused his job offer to practice in United States and flew back to India where he wanted to use his skills to serve the people of our Nation.

🔸By indigenous surgical instruments and suture materials, he successfully did many CABG surgeries in subsequent years.

🔸 Chance Favours the Prepared Mind – Dr. Cherian established experimental dog laboratory in railway hospital premises to get trained in surgical skills required to prepare for heart transplant. Also, he got trained and received Fellowship in Paediatric surgery at the University of Alabama, Birmingham in 1977 to treat Paediatric congenital heart diseases.

🔸Throughout his career, he has received many accolades to his credit and he is known for many firsts in the field of Cardiothoracic surgery in India:

🔅First to use Internal Mammary Artery Graft in CABG procedure in 1976.

🔅First correction of Transposition of Great Vessels by using Senning Technique in a two-year-old baby in 1979.

🔅First Heart Transplant in India after the legislation of Brain Death in 1995.

🔅Left Ventricular Assist Device as a bridging to heart transplant in 2011.

🔸He was the Founder of the Madras Medical Mission, Chennai and later became the Founder and Chairman of Frontier Lifeline Hospital, Chennai and St. Gregorios Cardio Vascular Center, Parumala, Kerala functioning from 2004.

🔸His phenomenal work in the field of cardiothoracic was honoured by many awards including Life Time Achievement Awards from various institutions and Padma Shri award from Government of India in 1991.

🔸Dr. Cherian imbibed the words of Greek Physician Hippocrates – “Wherever the art of medicine is loved, there is also a love of humanity.” It’s a moment of pride and unique honour to have the only Indian Physician’s name (Dr. K. M. Cherian) to be engraved in one of the stones at Island of Kos, Greece – the birth place of Hippocrates.

🔸Dr. Cherian is also the only Indian to be the president of the World Society of Cardio-Thoracic Surgeons and Founder member of the American Association of Thoracic surgery.

🔸Many surgeons in India as well as from abroad got trained under him. Moreover, Dr. Christiaan Barnard, the World’s First Heart Transplant Surgeon who visited Chennai, stayed 10 days with Dr. Cherian and appreciated his yeoman service to the society.

🔸Dr. Cherian was really inspired by the surgical works of our Ancient physician Maharishi Sushruta. So, he donated Sushruta’s statue – 1.2 meter in height, made up of marble stone with a granite base, weight 550 kg – to the headquarters of Royal Australasian College of Surgeons, Melbourne.

🔸Dr. Cherian is a strong supporter of Organ Transplant Movement and he involved himself with many new technologies such as cardiac stem cells, biological valves and bioprosthetic valves.

A Cardiothoracic Surgeon with Magic Scalpel