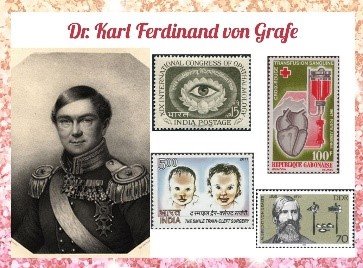 🔹Graefe had done his medical studies at Halle and Leipzig. He started his career as a Professor of Surgery and then he became the Director of Ophthalmology at Berlin University and served there from 1810 to 1840.

🔹Moreover, he was a pioneer of Plastic & Reconstructive surgery and a founder of German Rhinoplastic surgery.

🔹Dr. Graefe developed his own technique in rhinoplasty by upgrading both the Ancient Indian method of nose repair (Sushruta’s technique) and Italian Surgeon Tagliacozzi’s technique of 16th century.

🔹Furthermore, he coined the term Blepharoplasty. He was the first who used the word Plasty (Greek word “Plastikos” means to mould or to shape) in the year 1818.

🔹By using the term Rhinoplasty Dr. Graefe had given elegant name to the field as “Plastic surgery” in 1818.

🔹He also pioneered the technical improvement of Blood transfusion by using Graefe’s apparatus.

🔹Finally, he wrote an Encyclopedia – a Dictionary of Medical sciences and founded the first Journal of Surgery and Ophthalmology.

🔹Consequently, his son became the famous Ophthalmologist Dr. Albrecht von Graefe, who has often been credited as Founder of Modern Ophthalmology.

A Man of Many Innovations