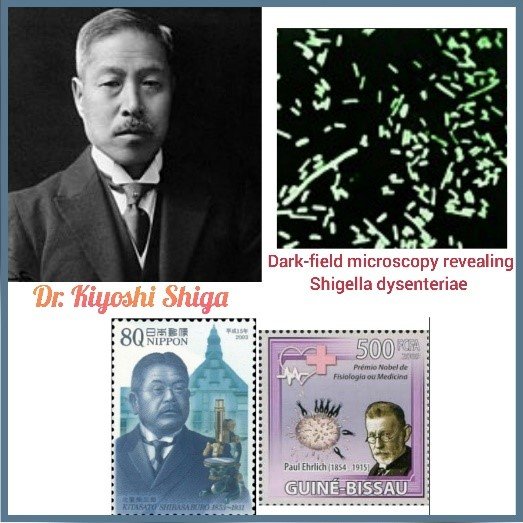 🔹Shiga was born at Sendai city in Japan. He studied medicine and graduated from the Medical School of Tokyo Imperial University in 1896.

🔹After his medical studies, he began his career under Dr. Kitasato Shibasaburo at the Institute for the Study of Infectious Diseases.

🔹Actually, Dr. Kitasto was a prestigious Japanese scientist and a pupil of Dr. Robert Koch. Moreover, Dr. Kitasato was well-known for his successful cultivation of Clostridium tetani and for his discovery of Tetanus antitoxin.

🔹In fact, Dr. Kitasato fine-tuned Dr. Shiga to get into microbiological investigation of a dysentery outbreak during 1897, which had a fulminating course and high mortality especially among children.

🔹As soon as Dr. Shiga initiated his research, he isolated a bacillus from stool, which was actually negative in gram-staining.

🔹Then the organism was named as Shigella dysenteriae and its toxin as Shiga toxin. He further published his findings with a gracious acknowledgment of Dr. Kitasato’s guidance.

🔹After the discovery of Shigella, Shiga joined work with Dr. Paul Ehrlich and got trained in Germany from 1901 to 1905.

🔹After returning to Japan, he resumed his study on infectious diseases with Dr. Kitasato. Then he became a Professor at Keio University.

🔹Thereupon, Dr. Shiga focused on the development of a Shigella vaccine. Subsequently, he prepared a heat-killed whole-cell vaccine and injected himself as the first study subject.

🔹He then developed a serum-based passive immunization and later an oral vaccine, which was administered to thousands of Japanese citizens. Thus, he became successful in vaccination against Shigella.

🔹In addition, Dr. Shiga composed the following calligraphy: “Follow the Mentor’s Spirit, Not the Mentor’s Footsteps.”

🔹Ultimately, Dr. Shiga earned a place in the milestones of microbiology by his creative thinking and contributions to research in the etiology, pathogenesis and vaccination of enteric diseases.