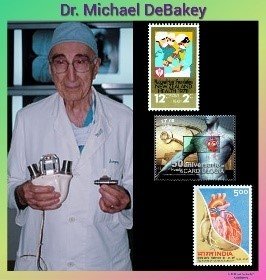 🔸DeBakey had done his medical studies at Tulane University School of Medicine, Louisiana, United States and graduated in 1932.

🔸During the Second World War, he served as a surgeon in the U.S Army and developed the Mobile Army Surgery Hospital (MASH) unit for treating the wounded soldiers.

🔸Then he got appointed as a Professor of Surgery in Baylor College of Medicine, Houston. Later, he became a Director of his own establishment – The Methodist DeBakey Heart & Vascular Centre at Houston.

🔸DeBakey was recognized as a Man of Innovations at his young age of 23 years. As a medical student, he developed the Roller Pump, which is an essential component of Heart-Lung Machine to provide continuous flow of blood during Open-Heart Surgery.

🔸He was one of the greatest surgeons of his period and he revolutionized the field of cardiology.

🔸He was one of the earliest surgeons to perform the coronary artery bypass graft. He also did the first carotid endarterectomy and was the first to use the Dacron grafts to repair an artery.

🔸Subsequently, he was the first surgeon to successfully use the Implanted Heart Device (Left Ventricular Assisted Device).

🔸He also contributed greatly to medical education by introducing the practice of Filming surgical procedures with an overhead camera in OT.

🔸Moreover, his curiosity made him to invent many surgical techniques and medical devices.

🔸DeBakey’s innovations helped preserve his own life in 2006. He suffered from dissected aortic aneurysm and underwent the repair procedure – a surgical technique which was devised by him 50 yrs back.

🔸He spent 75 years of his life serving in the field of medicine and continued to practice until his death at the age of 99 years.

A Ground-Breaking Cardiac Surgeon of the 20th Century