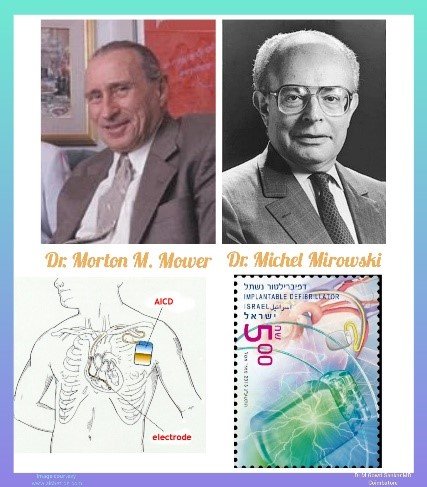 💠Inventor of the Implantable Cardioverter Defibrillator

🔹Mirowski was born in Poland. When he was a teenager, his country was invaded by Germans during the Second World War. Thus, he lost his own home and family members and fled to Ukraine. There he survived for next five years in most horrible conditions.

🔹After the war, he enrolled himself as a medical student at the University of Gdansk, Poland. Since he felt very unsafe there, he returned to France, where he continued his studies at the Medical School of Lyon and received graduated in 1954.

🔹After completion of his studies, he did his residentship at Tel Hashomer Hospital, Israel under Prof. Harry Heller, the chief of medicine, who later became his mentor.

🔹Suddenly, he lost his mentor Prof. Heller due to the more serious episodes of Ventricular Tachycardia while he was having dinner with his family.

🔹However, Mirowski strongly believed that this death could had been prevented if the defibrillator of small size had been implanted in the body.

🔹Even though the concept was far from being realistic, he wanted to miniaturize the 14 Kg – 18 Kg defibrillator to the size of a cigarette box.

🔹In order to enhance the funds and technical support for his project, he emigrated to United States and joined at Sinai Hospital – affiliated to Johns Hopkins University School of Medicine. There, he worked as the Director of the Coronary Care Unit and spent most of his time on his dream miniature defibrillator.

🔹He then Collaborated with his colleague, Dr. Morton Mower, an American cardiologist to develop the miniaturized device. After his constant effort of continuous 12 years, the first Automatic Implantable Cardioverter Defibrillator (AICD) was implanted in patient successfully on February 4, 1980, at the Johns Hopkins Hospital. Thereby, the new era began in fighting against the sudden arrhythmic death.

🔹Today, the millions of people around the world have been provided with the lifesaving protection of the AICD and it has revolutionized the approach to malignant arrhythmias.

🔹Through his experience, he summed up “Don’t Give Up, There is Always Some Way of Solving the Problem.”

The Man with a Mission