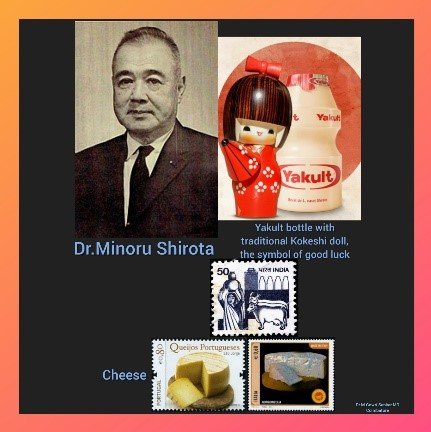 🔸Shirota was born and raised in Western Nagano, Japan.

🔸In the early 20th century, Japan was not prosperous and people were dying especially children due to infectious diseases, cholera, dysentery and malnutrition.

🔸That terrible situation of his country made him to study medicine and he committed himself to find a drug to prevent the spread of those diseases.

🔸Dr. Shirota strongly believed that “Prevention is better than cure.”

🔸Hence, he focussed his research on microorganism and after long years of research, he isolated a strain Lactobacillus in 1930.

🔸Further, he was the first in the world to successfully culture the Lactobacillus bacterium and named it Lactobacillus casei Shirota strain.

🔸The name reveals that…

🔅 “Strain Shirota” is a strain isolated & named by Dr. Shirota.

🔸Also, he believed that lactobacillus would support in improving the functioning of the digestive system and helps to build immunity. Therefore, he used that strain and developed the Yakult in 1935.

🔸Basically, Yakult is a delicious probiotic drink, which contains billions of lactobacillus to promote the balance of intestinal flora.

🔸Initiallty, Yakult was marketed in Japan and thereby Japan became the global leader in probiotic drink with global tagline of “The Kiss of Good Health.”

🔸Moreover, Lactobacillus casei is widely used along with other probiotics in treating acute and infectious diarrhea as well as used in preventing antibiotic-associated diarrhea and Clostridium difficile infections.

The Founding Father of Probiotics

The Promoter of Preventive Medicine