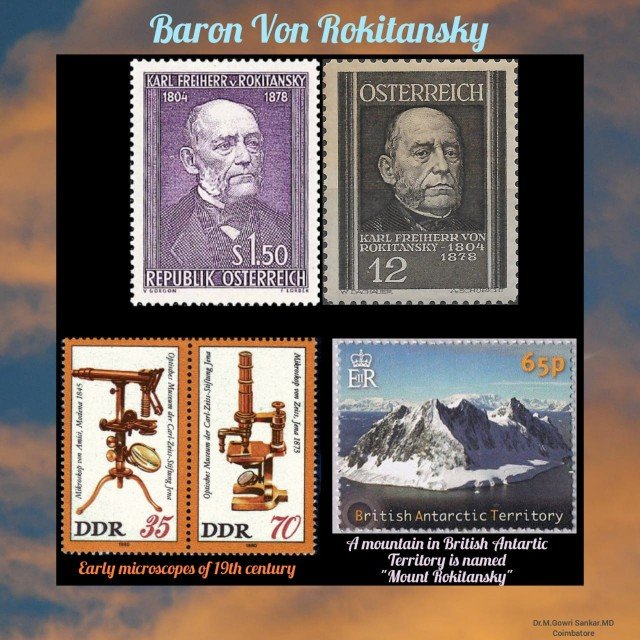 🔸Rokitansky was born in Koniggratz city, Austria (currently part of Czech Republic). Sadly, he lost his father in early childhood – thus his family faced severe financial difficulties.
🔸By the support of his uncle, he studied medicine in Vienna and completed his Doctorate in 1828.
🔸While studying medicine, he was particularly interested in anatomy and became a chair of pathological anatomy in Vienna Medical School. Later, he got appointed as the Professor of Pathology.
🔸In fact, Dr. Rokitansky is considered a first real descriptive Pathologist. He had put pioneering effort in elevating pathology to the status of recognised science.
🔸He is said to be a man of determination and dedication. He strongly believed that autopsy would reveal many disease patterns.
🔸Through his strong effort, Emperor Francis ordered that all who died in the general hospital of Vienna would be subject to a postmortem examination.
🔸Rokitansky also insisted for exploratory autopsy techniques instead of the current practice at the time of looking at a small set of organs.
🔸Because of his outstanding dissection technique, he supervised 70,000 autopsies and personally performed over 30,000 autopsies – averaging two a day, seven days a week for 45 years.
🔸He also familiarised himself with microscope and his histological techniques. He further demonstrated the clinicopathological correlation to diagnose the disease accurately by using autopsy.
🔸His acquired wealth of medical knowledge through observing thousands of autopsies that changed the face of medicine.
🔸Subsequently, he was the first to describe…
🔅Superior mesenteric artery syndrome.
🔅Bacteria in bacterial endocarditis.
🔅Distinguished lobar pneumonia and bronchopneumonia.
🔅Pulmonary emphysema.
🔅Spondylolisthesis and pelvis deformities.
🔅Patent ductus arteriosis.
🔅Endometriosis.
🔸 His Eponyms…
🔅Mayer Rokitansky kuster Hauser Syndrome – A syndrome affecting female reproductive system.
🔅Rokitansky diverticulum in oesophagus.
🔅Rokitansky triad – A subaortal septal defect, pulmonal stenosis and right lateral position of the aorta.
🔅Rokitansky aschoff sinus in gallbladder.
🔅Rokitansky Cushing ulcer.
🔅Rokitansky nodule in teratoma.
🔅Rokitansky mauda abbot syndrome – A rare congenital heart disease.
🔸Moreover, he published his acquired knowledge as 3 volumes of Handbook of Pathological Anatomy in 1846 and also published an outstanding monograph on the diseases of arteries and on congenital defects of the heart in 1875.
🔸In fact the modern pathology started from the work of Prof. Von Rokitansky. Ultimately, his work made Vienna as the great medical center of the world in the mid-19th century.
🔸In order to honour his meritorious service, he was given the knighthood in 1874 with the title Baron von Rokitansky.