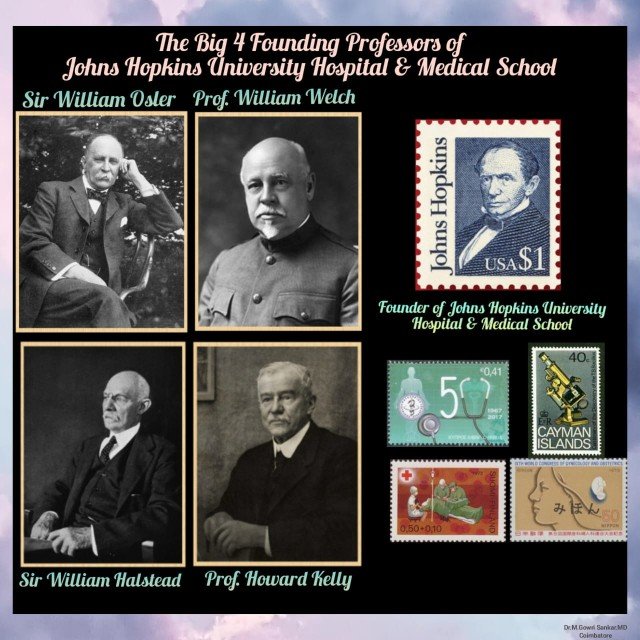 🔸Welch lost his mother, when he was an infant. He was brought up by his grandmother. Welch’s father, grandfather and four of his uncles were all physicians.
🔸Welch followed his in father’s footstep and studied medicine from Yale University and completed his MD at the Columbia University College of Physicians and Surgeons in 1875.
🔸Subsequently, he got trained in various European Universities of Strasbourg, Leipzig, Breslau and Berlin from 1876 to 1878.
🔸While at the University of Breslau, he witnessed Dr. Robert Koch’s historic demonstration of the Bacillus anthracis organism. In fact, Dr. Koch’s discovery initiated the golden age of bacteriology and paved a new era of public health.
🔸Upon his return to US, Dr. Welch was appointed the Professor of Pathology at Bellevue Hospital Medical College.
🔸Then he became one of the “Big 4” Founding Professors of Johns Hopkins Hospital, US in 1889.
🔸The “Big 4” are:
🔅 Prof. William H. Welch – Professor of Pathology
🔅 Sir William Osler – Professor of Medicine
🔅 Sir William Stewart Halstead – Professor of Surgery
🔅 Prof. Howard A. Kelly – Professor of Gynaecology
🔸Dr. Welch developed Hopkin’s first pathological laboratory and served as the first professor of pathology.
🔸He was a significant administrator and very shortly became the First Dean of the Johns Hopkins University School of Medicine in 1893.
🔸In 1916, he founded Johns Hopkins School of Hygiene and Public health – First public health school in US and became the First Director for the Institute of the History of Medicine.
🔸Moreover, he was the founder of the Journal of Experimental Medicine and also instrumental in founding of the Rockefeller Institute for Medical Research, and served its first chairman.
🔸His research was principally in bacteriology along with Dr. Simon Flexner, who demonstrated the pathological effects produced by diphtheria toxin.
🔸Prof. Welch discovered the causative organism of Gas gangrene which was named as Clostridium welchii (Welch’s bacillus).
🔸In fact, he revolutionized the modern medicine and played a pivotal role in establishing hospitals, medical schools, universities, laboratory, central library, journals and professional societies.
🔸In his lifetime, he was referred as “The Dean of American Medicine.”
🔸During his lifetime, Dr. Welch was honored with various national and international recognitions including eighteen honorary degrees, the Order of the Royal Crown in Germany and the Order of the Rising Sun in Japan.
🔸 “In addition to a three-storey intellect, Welch has an attic on top” – Sir William Osler.

The Physician Responsible for the Rise of Modern Medicine