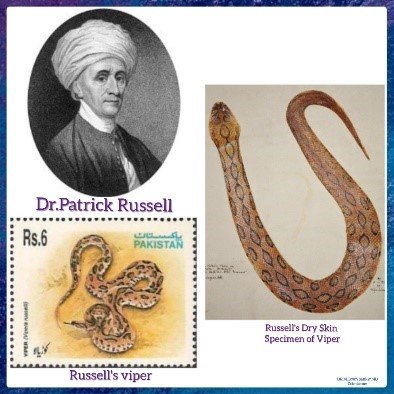 🔹Patrick Russell was born to the well-known lawyer of the town in Edinburgh. Russell was studious in his young age. He learned Roman and Greek classics even during school days. Then he studied medicine at the University of Edinburgh and graduated in 1750.

🔹Dr Patrick Russell’s professional career can be considered in two phases. The first phase is from 1750 to 1771 where he lived in Syria, and the second phase is from 1781 to 1791 in India.

🔹During the sudden outbreak of bubonic plague in Aleppo town, Dr. Patrick Russell faced a big challenge as a Physician and consequently he studied the clinical conditions of infected patients and also identified the procedures to prevent the infections.

🔹He also observed the association of rat fleas and the bubonic plague.

🔹Thereby, he proved himself as a keen observer and skilled physician in clinical practice. He also studied the local flora and fauna and published a book on the same.

🔹His work ultimately received great appreciation as The Sultan of Aleppo honoured him with the traditional turban, which is a privilege and symbolic gesture of recognition.

🔹In the year 1780, he arrived India to take care of his sick younger brother, who was a chief administrator of the East India Company at Vizagapatnam in Madras Presidency.

🔹Later, he got appointed in the East India company as a Physician and also received an offer to serve as a Botanist or Naturalist.

🔹Being a Naturalist, Russell showed a great interest in the exploration of flora and fauna of Indian subcontinent, which was virtually unexplored.

🔹In fact, he had collected about 900 herbarium specimens and explored the efficacy of indigenous medicinal plants.

🔹Dr. Russell was also much worried about the snakebite epidemics and the devastating effect among local community in Coromandel coast in Eastern India.

🔹Therefore, he started studying the snakes of India and he was the first one to carry out detailed studies on snakes.

🔹He documented the habits and behaviours of several snakes and studied the dentition and bite pattern of the snakes.

🔹He further conducted many experiments on the venom of the local snakes and documented the envenomation on dogs, rabbits and chickens. Subsequently, he studied on the neurotoxic and the haemorrhagic effects of venomous snakes.

🔹By doing the envenomation experiments, Dr. Russell’s became the first to classify venomous and non-venomous snakes.

🔹After gaining the knowledge on Indian snakes, Dr. Russell educated the local inhabitants to differentiate the venomous and the non-venomous snakes by the descriptions and figures of the snakes through pamphlets.

🔹Moreover, he was the first to describe the venomous snake called Katuka Rekula Poda in the local Telugu language, whose venom was shown experimentally by Dr. Russell to be nearly as lethal as that of Cobra. The snake is now known as Russell’s viper in his honour.

🔹Furthermore, he published his masterpiece, a two volume books named “An Account of Indian Serpents” in 1796 which has 100 folio hand-coloured plates of snakes. His book is considered the first text book exclusively on snake fauna of India.

🔹His two major collections of dried, flattened and mounted snake skins including 175 specimens, water color drawings of reptiles and his books are exhibited in the Natural History Museum, London.

The Father of Indian Herpetology