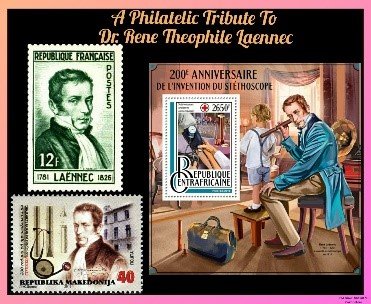 🔹Laennec was born in a small village in Brittany, France. When he was 5 years old, he lost his mother to tuberculosis.

🔹He was raised by his uncle, who was the Dean of the medicine at the University of Nantes. As per his guidance, Laennec studied Latin and Greek. Also, learned to play the flute and wrote poetry.

🔹At the age of 14 years, Laennec joined at the famous hospital Hotel Dieu, in Europe. He served there as an assistant in caring the sick and wounded patients.

🔹After his medical graduation in 1804, he served at the Necker Hospital in Paris.

🔹While on clinical practice, Dr. Laennec was embarrassed to do Direct auscultation (placing ear on the chest of the patient to listen to chest sounds directly) especially to women.

🔹Suddenly, Laennec recalled his observation of children playing with long hollow tubes. The game is actually two children sending signals to each other using a long piece of solid wood and a pin. With an ear to one end, the child received an amplified sound of the pin scratching the opposite end of the wood.

🔹Thereby, he came up with a new idea of listening to the chest by rolling up a sheet of paper into a tube and placed one end on the patient’s chest. However, he found the sound clearer and more distinct.

🔹In 3 years of time, he refined his invention by testing various types of materials to make fine tubes. Finally, in 1816, he invented the Wooden Hollow Tube – which was 3.5 cm in diameter and 25 cm long and was monoaural – to transmit sound to one ear.

🔹He named his instrument as STETHOSCOPE. In Greek, stethos means chest and skopein means explore.

🔹He perfected the art of auscultation of the chest by describing the various auscultatory findings in bronchiectasis, pneumonia, pleurisy, emphysema, and pneumothorax.

🔹In fact, he was the first to describe the bronchial and vesicular breath sounds, egophony, bronchophony, pectoriloquy, murmurs and the two heart sounds S1 & S2.

🔹Further, Dr. Laennec introduced many terminologies such as rales, rhonchi and crepitations, which are still being used.

🔹All over his career, he confirmed all his clinical diagnosis with the observations made in autopsies.

🔹In the year 1819, he revolutionized the field of medicine by publishing his masterpiece, On Mediate Auscultation.

🔹After the publication of the English translation of his seminal work, he gained worldwide popularity. Hence, physicians from all over Europe came to him to learn about the new device.

🔹Unfortunately, Dr. Laennec suffered from cavitatory tuberculosis and his life came to an end at the age of 45 years. His nephew used his own stethoscope and diagnosed the tuberculosis.

🔹Certainly, Dr. Laennec perfected the art of physical examination of the chest by using his invention – the stethoscope. His work was acknowledged to be a great advancement in the knowledge of chest diseases.

The Master of Clinical Diagnosis