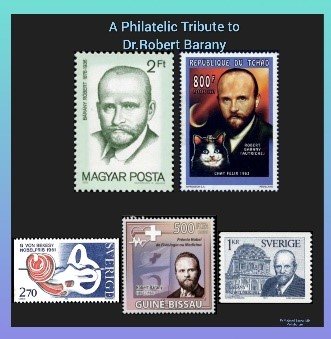 🔹Barany was born in Vienna. Unfortunately, he suffered from tuberculosis of bones during his school days, which resulted in permanent knee stiffness. This painful illness pushed him to get into the field of medicine.

🔹He enrolled himself in Vienna University and completed his MD degree in 1900. Subsequently, he joined work as an assistant under the Prof. Adam Politzer, who was the first teacher of Otology at Vienna University.

🔹While he was treating the patients with ear infections, Dr. Barany noticed that few patients had experienced dizziness accompanied by nystagmus in eyes, when irrigating the external auditory canals with a syringe.

🔹Then he studied the role of endolymph of semi-circular canal, vestibular nuclei and the centres controlling eye muscle movement in response to warm and cold-water irrigation, which is named as Barany Caloric Response Test.

🔹Thereupon, he volunteered himself in the First World War, and served as a civilian surgeon in the Austrian army. But unfortunately, he was captured by the Russian army and prisoned in the war camp. He continued treating the soldiers even in the camp.

🔹By considering his previous work on the physiology and pathology of the vestibular apparatus, he was nominated to the Nobel Committee seven times. Finally, in the year 1914, Dr. Barany was awarded Nobel Prize in Medicine or Physiology.

🔹But Dr. Barany was not able to receive the award in 1914. Then after a personal intervention by Prince Carl of Sweden on behalf of Red Cross, Dr. Barany was released to receive his award from the King of Sweden in Nobel Prize awards ceremony at Stockholm in 1916.

🔹Thereafter, Dr. Baranry spent the rest of his life in Sweden. There, he continued his contribution to otolaryngology by developing a new Otolaryngology clinic and also became a Professor of an Otological Institute in Uppsala University.

🔹Moreover, in 1921 he was the first to describe the Benign Paroxysmal Positional Vertigo (BPPV) of the posterior canal.

🔅 Barany Chair – A device which is used in Aerospace Physiology Training for student pilots for spatial orientation as well as used to correct motion sickness.

The Father of Otoneurology and Vestibular functions