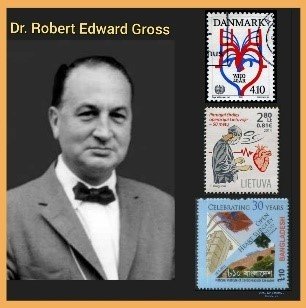 🔹Gross was born as the son of a Piano maker. While studying Chemistry, he got the two-volume set of Sir Harvey Cushing’s monumental biography “The Life of Sir William Osler.“

🔹As he was captivated by Dr. Osler’s work, he enrolled at the Harvard Medical College after completion of his graduation in Chemistry.

🔹Further to the completion of medical studies, he started his career under Dr. William Ladd, who was a Professor of Paediatric surgery at Boston children’s hospital.

🔹Dr. Gross was the first to perform the successful ligation of Patent Ductus Arteriosus in a 7 years old girl on Aug 26, 1938. This became a milestone in the development of cardiac surgery.

🔹In addition, he did the First successful corrective surgery for Coarctation of aorta in 1945.

🔹He also performed many other innovative procedures. Later, he did one of the largest series in the world of successful open heart repairs in congenital anomalies of the heart in infants and children.

🔹In collaboration with Dr. William Ladd, he published the first textbook on surgery in children called “Abdominal Surgery of Infancy and Children” in 1941. This book is considered the masterpiece in surgical literature.

🔹In 1953, he published his classical book, “The Surgery of Infancy and Children,” which is often referred as “The Green Bible.“

🔹He was one of the great pioneers in cardiac surgeries with a brilliant career spanning more than 40 years. His tremendous contributions have altered the practice, understanding of surgery, paediatrics and cardiology all over the world.

A Surgeon with Remarkable Career