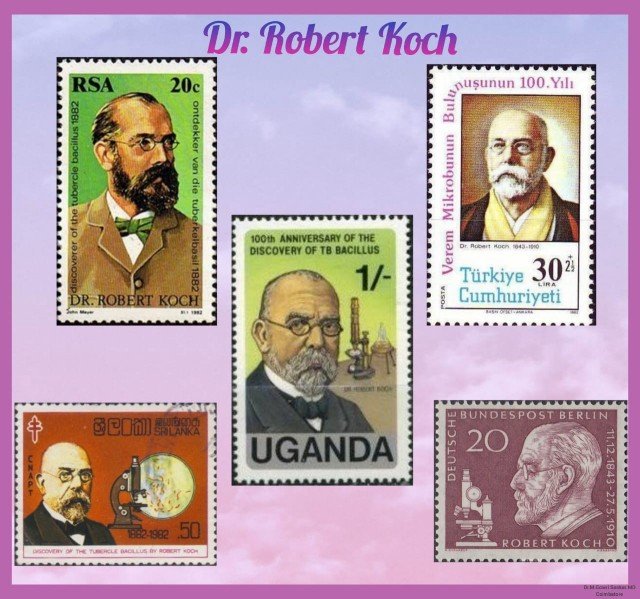 🔹Robert Koch was born in Germany. He was a child genius who loved to read classical literature and was also a chess expert.
🔹Koch completed his medical degree from the University of Gottingen, Germany and graduated in 1866.
🔹After his studies, he volunteered himself for the role of Military surgeon in the Franco-Prussian war. Later, he got appointed as a District Medical Officer and started his research on infectious diseases.
🔹In fact, Koch wanted to build upon Pasteur’s work on Germ theory. So he started developing new experimental methods to test whether a particular microorganism is the cause of a disease.
🔹During the year 1891, Dr. Koch was appointed as the Director of The Royal Prussian Institute for Infectious Diseases (today’s Robert Koch Institute) in Berlin, which opened its doors for his research.
🔹Subsequently, Dr. Koch was the first who proved that a microorganism was the cause of an infectious disease. He discovered bacterium Bacillus anthracis as the causative of Anthrax in 1876.
🔹He observed the bacterium in the tissue of anthrax victims and also extracted the same bacterium from a sheep which had died because of anthrax.
🔹He successfully isolated the bacteria by creating a solid medium for growing bacteria and was much more convenient than the liquid medium.
🔹Simultaneously, Dr Koch’s assistant Dr. Julius Richard Petri developed the Petri dish, which made the observation of bacteria even more easier.
🔹Further, Dr. Koch and his team developed various ways for staining bacteria to improve the bacteria’s visibility under the microscope.
🔹Moreover, Dr. Koch had formulated the criteria for establishing a cause of an infectious disease. Those rules were termed as “Koch’s postulates.”
🔹By using his new methods, Dr. Koch was able to identify Tubercle bacilli in 1882 and Cholera in 1883. Furthermore, his method paved the way for other researchers in identifying the causative organism.
🔹On the evening of March 24, 1882 a major event was held in the History of Medicine.
🔹In that monthly meeting of the Physiologic Society of Berlin, Dr. Robert Koch announced under the title “The Etiology of Tuberculosis,” his discovery of Mycobacterium tuberculosis.
🔹Thereupon, Dr. Robert Koch’s brilliant contributions were honoured with most prestigious Nobel Prize for Physiology or Medicine in 1905.
🔹Actually, both Dr. Louis Pasteur and Dr. Robert Koch were the pioneers of microbiology.
🔹In addition, Dr. Koch had further contributed by his significant methods of growing, staining, identifying and controlling bacteria in the lab. Also, his discovery of individual pathogens had paved the way for therapies and preventive measures.

The Father of the Scientific Study of Tuberculosis

The Master of Medicine