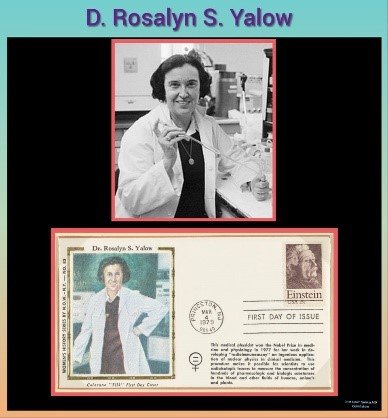 🔸Yalow was born to the parents who never even finished high school. In spite of that, she graduated in Physics with honours from Hunters College, New York in 1941.

🔸She also did her Ph.D. in Nuclear Physics and then she worked as a lecturer. At one point of time, she decided to devote her career to full-time research.

🔸She collaborated with her colleague Dr. Solomon A. Berson, an American Physician, and together they developed the Radioimmunoassay (RIA) in 1960.

🔸By this method, they assessed the concentration of insulin in human plasma. This created a revolution in biological and medical science.

🔸By using the RIA method, they were the first to detect Insulin Antibodies. Also, by measuring insulin level, they found that Type 2 diabetes patients produced more insulin than non-diabetics, providing evidence that inability to use insulin caused diabetes (previously believed to be a lack of insulin). This pioneering work turned diabetes research into new direction.

🔸However, they both refused to patent their ground-breaking method. The RIA paved a new way in the field of medicine by…

🔅Screening viruses in blood and blood products in blood banks.

🔸In 1977, she was honoured with shared Nobel Prize in Physiology or Medicine for the development of medical diagnostic test – Radioimmunoassay.

🔅National Medal of Science – An American award for highest honour for Science and Technology.

🔸Before the introduction of RIA, there was a lot of guesswork in medicine. Their discovery replaced all the guessworks.