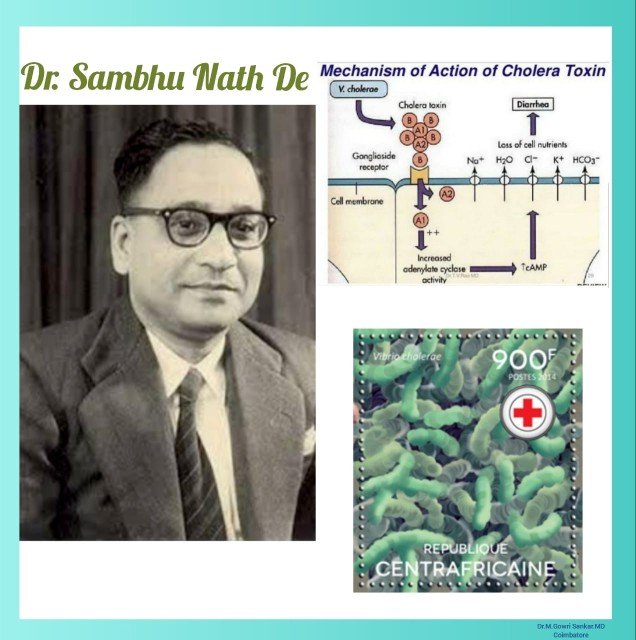 🔹 Dr. Sambhu Nath De was popularly known as Dr. S. N. De. He was raised in a village at Hooghly District, West Bengal. In fact, his uncle was the only educated member in the family. Through his support, De completed his schooling with distinction.
🔹Through the merit scholarship, De studied medicine at the Calcutta Medical College. During his college days, he was highly inspired by his mentor Dr. M. N De, a Pathology professor, who became his father-in-law later.
🔹De completed his medical studies in 1939 and then did Diploma in Tropical Medicine in 1942. Later, he obtained his Ph.D. in Pathology at the University of London in 1949.
🔹After returning to India, Dr. De began his career at Nil Ratan Sarkar Medical College and was gradually promoted to Head of Pathology and Bacteriology at Calcutta Medical College, where he worked until his retirement.
🔹During his service period, Cholera disease was threatening the Calcutta city. This made him focus on the disease, so he started the seminal work in the field of bacteriology.
🔹 History of Cholera:
🔅Cholera, a rapid lethal dehydrating infectious disease, had been taking a toll of millions of lives across the world for many centuries.
🔅Earlier it was widely believed that the disease was caused by miasma (Bad air).
🔅But an Italian Anatomist Filippo Pacini was the first to describe cholera bacillus in the intestinal mucosa of patients, who died of cholera during its pandemic in 1854. But his work went unnoticed.
🔅After that, Dr. John Snow, a British Physician by his classic epidemiologic studies described that the causative agent got transmitted via contaminated water in 1855.
🔅Thereafter, Dr. Robert Koch first cultured the pathogenic bacteria Vibrio cholerae during its epidemic at Calcutta in 1884.
🔅After 75 years of Dr. Robert Koch work, in 1959, Dr. De’s discovery of Cholera toxin in Vibrio chlolerae – the best studied pathogen at the molecular level – created a new paradigm in the research on cholera.
🔅Dr. De had done all his experiments in an animal model – “The rabbit intestinal loop model method.” By this technique, he identified that cholera is localised to a small segment of the intestine.
🔅Further, he isolated Cholera exotoxin and proved that the cholera exotoxin changes the permeability of the intestinal cells, resulting in an explosive secretion of fluids, which leads to rice water like appearance in stools.
🔹By the same intestinal-loop technique, subsequently Dr. De demonstrated that enterotoxins of Escherichia coli induces similar intestinal secretions, which is an another milestone in the field of medicine. Today this is firmly entrenched as Enterotoxigenic E.coli.
🔹Ultimately, his work paved the way for the introduction of Oral Rehydration Solution a simple home-made therapy that has saved millions of lives around the world by combating diarrhoea induced dehydration.
🔹In fact, his groundbreaking work earned him International recognition after his findings were published in the Journal Nature in 1959.
🔹Additionally, Dr. De had published more than 30 research papers and wrote an excellent monograph on Cholera and its Pathogenesis.
🔹Beacise of his work he was nominated twice for Nobel Prize. In 1978, he was invited by the Nobel Foundation to be a guest-speaker 🎙at a special symposium and received great appreciation.
🔹Undoubtedly, Dr. De blazed a new trail, which has not only given the new insight in to the mechanism of the disease but also led to the development of cholera vaccination and oral rehydration therapy.