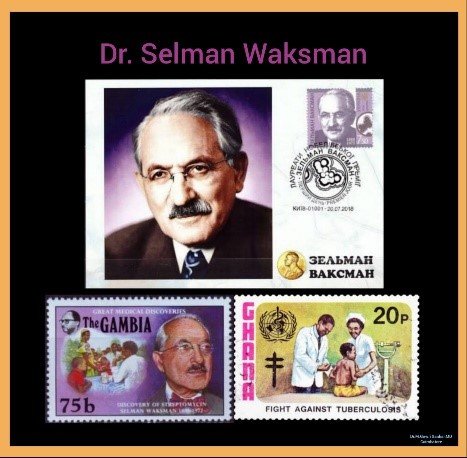 🔹Waksman had studied agriculture at Rutgers University, New Jersey. Then he did his Doctorate in Biochemistry at the University of California in 1918. After his studies, he began his research on Soil Bacteriology.

🔹In the year 1940, he was the first to identified the soil organism Actinomyces antibioticus. Further, he isolated a new substance called “Actinomycin” and found that it had both bacteriostatic and bactericidal effects.

🔹Afterwards, Waksman and his Ph.D. student Albert Schatz had jointly discovered Streptomycin, which was isolated from the organism “Streptomyces griseus.” This was the first antibiotic to be found and became the greatest breakthrough in the medical field against tuberculosis.

🔹He then proposed the new term Antibiotics in 1941 for these natural growth inhibitors and earned the title “Father of Antibiotics.”

🔹Consequently, he was honoured with Nobel Prize in Medicine or Physiology in 1952 for his great discovery of streptomycin.

🔹He further received Japan’s highest honour “The Star of the Rising Sun” by the Emperor of Japan.

🔹Finally, he established Waksman Foundation of Microbiology at Rutgers University in 1951, by using his patent royalties from the drug Streptomycin and Neomycin.

One of the Greatest Benefactors of Mankind