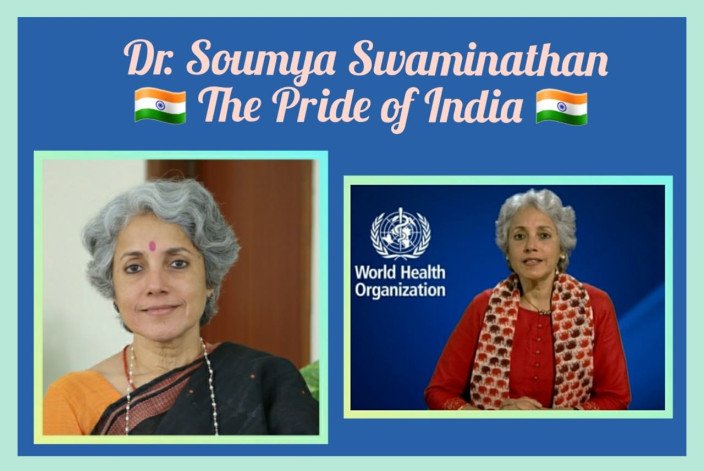 🔹Dr. Soumya was born in Kumbakonam, Tamil Nadu. She is the daughter of Dr. M. S. Swaminathan “Father of Indian Green Revolution”. Her mother Mina Swaminathan is an Indian educationist in the field of school education.

🔹Dr. Soumya was highly inspired by her parents because they devoted themselves to their field. She studied medicine at Armed Force Medical College, Pune and completed her MD in Paediatrics from All India Institute of Medical Sciences, New Delhi.

🔹She further did her Post-Doctoral Fellowship in neonatology and pediatric pulmonology in U.K and U.S.

🔹In 1992, she joined as a Coordinator at the National Institute for Research in Tuberculosis, Chennai and later she became the Director of the Institution.

🔹Moreover, she is a globally recognized researcher on tuberculosis and HIV. She contributed herself to clinical care and research for around 30 years. Throughout her career, she focused on translating research into impactful programs.

🔹She also served as coordinator of the UNICEF, UNDP, World Bank and WHO‘s special program for research and training in Tropical diseases.

🔹Thereafter, she worked as the Director-General of India at the Indian Centre of Medical Research (ICMR) – An apex body in biomedical research, and also served as the Secretary of the Department of Health Research (Ministry of Health & Family Welfare) for the Government of India.

🔹Additionally, she has published more than 350 peer-reviewed publications and many book chapters.

🔹Later, she got appointed as the Deputy Director General of Programmes at the World Health Organisation and served from October 2017 to March 2019.

🔹In fact, she is the first Indian to hold the highest rank in WHO. She said “I don’t take it as a personal recognition, but a recognition that…an Indian voice should be there in the WHO.”

🔹Since March 2019, she is the Chief Scientist of the WHO. Presently, she leading a seminal role in combating pandemic Covid-19.

A Dynamic & An Inspiring Physician