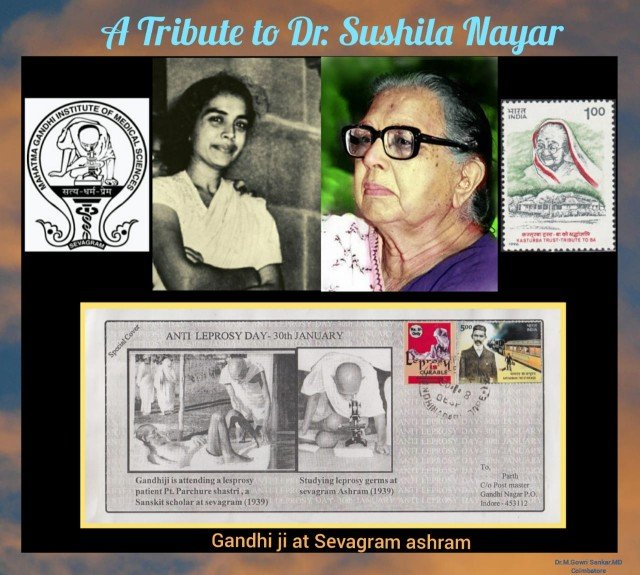 🔸Sushila was born in a middle-class family at Kunjah (Gujarat), which is now in Pakistan.
🔸Her brother Pyarelal was thethe secretary of Mahatma Gandhi ji. So, Sushila used to go often to Sabarmathi ashram and Sevagram ashram to meet her brother.
🔸She was impressed by Gandhi’s philosophy. When she was a medical student at Lady Hardinge Medical College, she successfully handled the cholera outbreak at Sevagram.
🔸Her impressive work caught the attention of Gandhi ji and she was highly praised for her courage and commitment to public service.
🔸After her MD graduation in 1942, Dr. Sushila became personal Physician to Gandhi ji and Kasturba Gandhi.
🔸Later, she joined Gandhi for Indian freedom movement including Quit India movement and got imprisoned many times.
🔸Simultaneously, she wanted to continue her medical service. So, she began a small dispensary in the Sevagram ashram premises to serve the needy. Shortly, she converted it into a 15 bedded hospital named Kasturba Hospital.
🔸After Gandhi’s assassination, Dr. Sushila moved to US and obtained two degrees in Public Health from the Johns Hopkins School of Public Health to serve the nation better.
🔸Upon her return in 1950, she continued her medical service and also associated herself in politics. In fact, she was affectionately called as Badi Behenji by all.
🔸In assembly elections, she was elected as a Legislative member in Delhi state. Under prime minister Jawarhalal Nehru, she became independent India’s first health minister of Delhi state. Later, she also served as the Union Health Minister from 1962 to 1967.
🔸During her service as a minister of health, she initiated many fundamental health programs including treatment and control of malaria, venereal disease, tuberculosis, leprosy and also established the emergency medical services in New Delhi.
🔸Under Shri Lal Bahadur Shastri, she was motivated to start a rural medical college to serve the rural people.
🔸Moreover, she handled Kasturba Hospital at Sevagram and soon it became Mahatma Gandhi Institute of Medical Sciences (MGIMS) in Gandhian birth centenary year, 1969.
🔸In fact, MGIMS was the India’s first attempt to steer rural health in a new direction. She became the Founder Director of the institution. Further, she served as the President of Kasturba Health Society.
🔸During the more than 40 years of her career, Dr. Sushila Nayar was a central figure in the development of many health care programs and educational institutes in India.
🔸Ultimately, she was celebrated as a multifaceted women as a Physician, freedom fighter, politician, educationalist, social reformer, spiritualist and a great humanitarian.
🔸In spite of her medical and public services, Dr. Sushila used to participate in Friday evening prayers in Sevagram till her last days. After the prayer, she used to preach the Gandhian principles and spirituality to the audience.

A Beacon of Feminism

The Leading Figure of Public Health of Our Nation