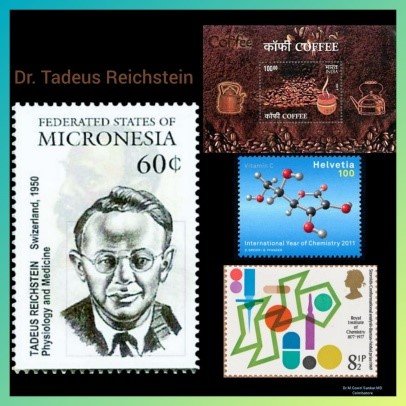 🔹Reichstein studied chemistry in Zurich and completed his Ph.D. in organic chemistry during 1925.

🔹After his studies, he began his research and thereby he became one of the Century’s Greatest Masters of Organic Chemistry.

🔹He was the first to investigate the cause of the flavour of coffee. His revelation became a basis for the production of modern powdered extracts of coffee.

🔹Subsequent to the discovery of Vitamin C by the British Scientist Sir Norman Howarth, Dr. Reichstein investigated and was the first to carry out the synthesis of Vitamin C.

🔹He further established “Reichstein Process,” which is a bacterial fermentation method for the large-scale production of Vitamin C. It’s still being used but in modified form.

🔹In the mid-1930s, he pioneered the discovery on hormone produced from the adrenal glands. Subsequently, he isolated Cortisone and then along with his assistants extracted another 29 different steroids from adrenal gland within ten years of time.

🔹Consequently, Dr. Reichstein was honoured with shared Noble Prize of Medicine or Physiology in 1950 with two American scientists Edward Kendall and Philip Hench, for the discovery of cortisone in treating rheumatoid arthritis.

🔹Although he retired in 1967, he continued to study phytochemistry and related ferns in his laboratory.

🔹He also published more than 80 articles during last three decades of his life. Moreover, he was the only Noble Laureate to live till the age of 99 years.