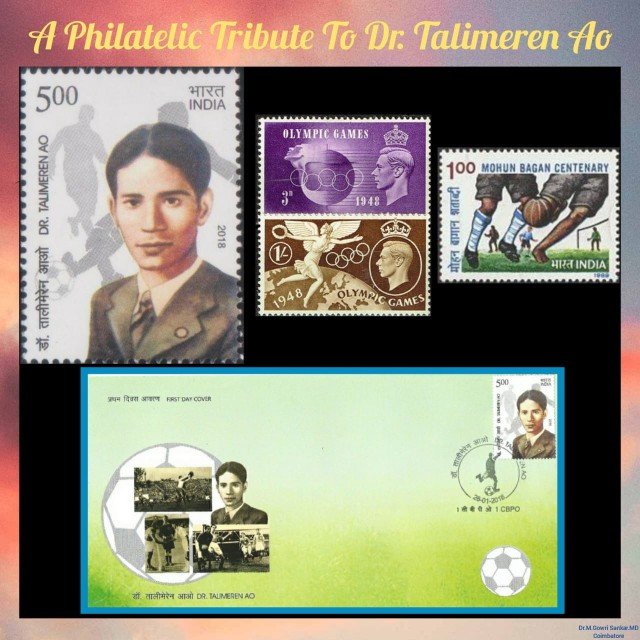 🔸Talimeren was born in a small village called Changki in Nagaland. He was an avid football lover from childhood. He used to play and practice football with senior players.
🔸He was also interested in volleyball and showed good performance in track and field events as well. In fact, he made an unofficial Indian record of 23 feet in long jump.
🔸Besides sports, Talimeren was also studious. After his one year course of B.Sc in Physics from Cotton College of Guwahati, Assam, he studied medicine at R. G. Kar Medical College and Hospital, Kolkata in 1943.
🔸While a medical student, his joined in Mohun Bagan Football Club at Kolkata, where he was a dominating midfielder and a defender.
🔸His glorious performance and admirable sportsmanship led him to be the Captain of Mohun Bagan. During his captaincy, the team won many football matches at national level.
🔸But his greatest achievement in life came in 1948. After independence, Indian football team decided to compete in the London Olympics and Talimeren was elected as the Captain of the Indian Football team and he was India’s first flag bearer in Olympics opening ceremony.
🔸Unfortunately in London Olympics, our Indian team lost against France by 2-1 goals. With fighting spirit, our team played football without boots, which stunned even Queen Victoria.
🔸After the match, the whole Indian team was invited for dinner at the Royal Buckingham Palace and was honored.
🔸Talimeren’s play was well appreciated and he got an offer to play for one of the professional Football Club’s of London, but he refused because of the love for his nation.
🔸He was a humorous person – once a reporter asked him about the reason of playing without boots, and he cheekily replied that Indians play football, not bootball.
🔸After completing his medical studies in 1950, he headed the Indian team for many friendly matches in Wales, Holland, Singapore, Hong Kong, Malaysia, Myanmar and Bangladesh.
🔸In fact, his father had a wish to serve Nagaland people. As he wanted to fulfill his father’s desire, Dr. Talimeren left his comfortable city life and moved to his home town. He joined there as an assistant civil surgeon and later he became the first Director of Health Services of Nagaland and held the post until his retirement in 1978.
🔸While on service, he was elected as a member of All India Football Selection Committee and Nagaland Sports Committee.
🔸Being a legendary footballer and a physician, he focused on the importance of sports for good health. So, he encouraged many local football clubs and also created the Nagaland Medical Football Team.
🔸In order to honor his extraordinary contributions in the field of sports, two football tournaments were initiated in his name in north-east India. Also, the stadiums in Guwahati and Kaliabor bear his name.
🔸More than being a football player, sportsmen and a physician, Dr. Talimeren was a revolutionary and a trendsetter, who encouraged the North-East Youth to excel in both sports and academics. He is celebrated as The True Son of North-East Soil.

The Father of North-East Football

The First Football Hero of India