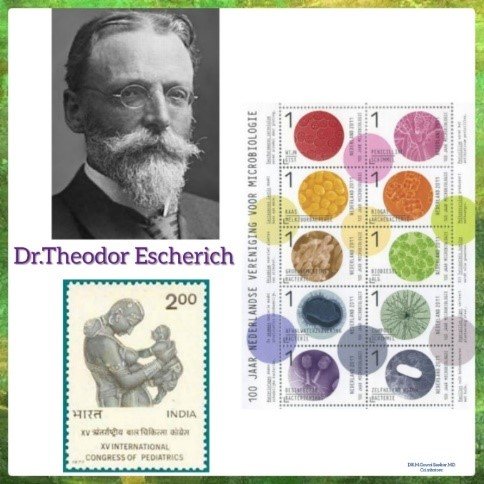 🔹Theodor Escherich was born in Germany. His father was a District Medical Officer and a famous medical statistician. Moreover, he was very concerned about high neonatal mortality rates in his period.

🔹Escherich wanted to follow in the footsteps of his father so he enrolled himself to study medicine at the University of Wurzburg and graduated in 1881.

🔹After completing his studies, he began his career in a Military Hospital in Munich and served there for 18 months. Then he moved to the St Anna Children’s Clinic, in Vienna, Austria.

🔹His experiences in Vienna had actually convinced him to devote his career to Paediatric Medicine.

🔹Further, he did extensive research and published his landmark bacteriologic studies entitled “Enterobacteria of infants and their relation to digestion physiology” in 1886.

🔹Through his studies, he became the first to demonstrate that meconium was a sterile and that bacterial intestinal colonization is attributable to the infant’s environment within 3-24 hours after birth and with a variety of bacteria present by 24 hours.

🔹In this studies, he was the first who described in detail about Bacterium coli commune (now known as Escherichia coli) and Bacterium lactis aerogenes (now known as Klebsiella pneumoniae).

🔹These studies clearly established Dr. Escherich as the foremost expert on bacteriology in paediatrics. Thereby, he became the First Paediatric Infectious Diseases Physician.

🔹Furthermore, the academic interests which he developed in Vienna led him to focus on scarlet fever, diphtheria, tuberculosis, dysentery and allergy.

🔹Also, Dr. Escherich described about Escherich’s reflex in Infantile Tetany during 1890. It is pouting of the lips after stimulating the labial mucosa by tapping the lips – often called the snout reflex.

🔹Subsequently, Dr. Escherich founded the “Infant Defence Society” in 1903 and initiated a high-profile campaign to educate about breastfeeding and also developed the Volumetric system of infant feeding that involved the weighing of infants before and after nursing.

🔹 Additionally, he published about 160 articles and 3 books. Those are:

🔅 The Bacteria of the Intestines of the Infant

🔹Ultimately, Dr. Escherich was celebrated as a Master clinician, Teacher and a Researcher.

🔹Alike his father, he also became a famous physician. Moreover, he was very successful in his career and widely regarded as an eminent bacteriologist and a champion in paediatric medicine.