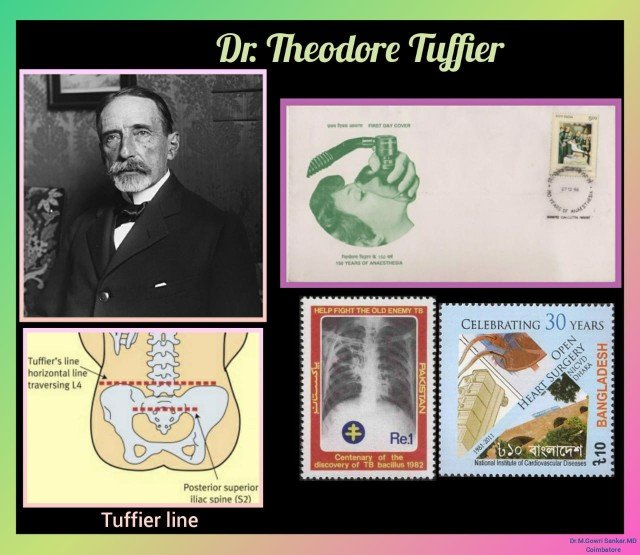 🔸Theodore Tuffier is one of the amazing pioneer in the field of cardio thoracic surgery and anaesthesia.
🔸He was born at Belleme in north western part of France. After completion of his medical studies in 1879, he began his service at Pitie-Salpetriere Hospital, which is a teaching institution and the largest hospital in France.
🔸Then he moved to Beaujon Hospital, Paris and became the assistant professor in 1889.
🔸During his career, he was an outstanding clinical surgeon and also he was constantly involved in experimental research in Paris as well as at the New York Rockefeller Institute with Dr. Alexis Carrel.
🔸In 1891, he performed the first ever pulmonary resection for tuberculosis and he was the first to describe about artificial pneumothorax in the treatment of tuberculous cavities.
🔸Also, he did early experimentation on artificial respiration and published his experiment on Artificial respiration using intratracheal intubation with the inflatable cuff tube in 1896.
🔸Further, he designed the metal inhaler for the administration of chloroform during surgery so that he could administer chloroform in a more controlled and continuous manner.
🔸In addition, he was the first to administer Intra thecal anaesthesia and designed a small-gauge spinal needle. He authored a text book on spinal anesthesia for surgery, which was published in 1901.
🔸Moreover, he performed the first successful experimental operation for the relief of chronic valvular disease in 1912. He had one patient with severe Aortic stenosis, where he used his finger to invaginate the anterior aortic wall through aortic orifice and dilated it.
🔸In the year 1914, he associated with Dr. Alexis Carrel and together published an amazing paper on experimental beating open heart surgery. In that, they described various surgeries on the cardiac valves in animals.
🔸Later, Tuffier’s experiments started encouraging other surgeons to proceed with valvular surgery.
🔸In fact, he made three most remarkable contributions in the field of pulmonary resection, intratracheal anesthesia and experimental cardiac surgery.
🔸In modern medicine, Dr. Theodore Tuffier is best known by his Tuffier’s Line, which is an imaginary line connecting the iliac crest used as a landmark for lumbar intervertebral space to administer spinal anaesthesia and for lumbar puncture.