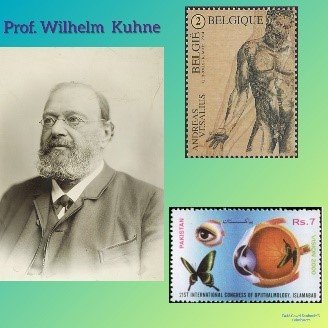 🔹Kuhne completed his studies in chemistry from the University of Gottingen and he obtained his PhD on Induced Diabetes in Frog.

🔹After completion of his studies, he worked in various laboratories with some of the best European scientists of that period such as Lehmann, Claude Bernard, Von Bruke, Rudolf Virchow and Carl Ludwig.

🔹Then he became a Professor of Physiology in 1868 at Amsterdam and was later posted in Heidelberg.

🔹Kuhne determined the fundamentals of three main areas such as:

🔅Physiology of Muscle and Nerves

🔹He further did his experimental work with sartorius muscle and demonstrated that nerve fibres conduct impulses in both direction. Also, he demonstrated that the chemical and electrical stimulus exites muscle fibres.

🔹Subsequently, he demonstrated the Kuhne’s muscular sign – by passing a continuous current in living muscle fibre cause an undulation (smooth wave like motion).

🔹He also extracted a viscous protein from muscle, named it as Myosin and further concluded that it was responsible for rigor state of muscle.

🔹In addition, he isolated Trypsin from pancreatic juice and coined the term called Enzyme.

🔹Moreover, he observed that chemical changes occur when light strikes the retina of eye. This lead to introduction of the term Rhodopsin – the pigment found in the rod cells of the eyes.

The Physician Who Laid the Foundation of Modern Physiology