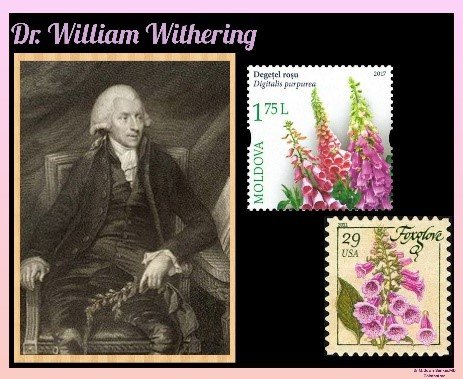 🔹Withering was highly influenced by his father, who was a chemist, and his physician uncle. Therefore, he studied medicine at the University of Edinburgh and graduated in 1766.

🔹After completing his studies, he began his private practice and he married a Botanist Illustrator named Helena Cookes

🔹Simultaneously, his interest had grown in the field of botany. He further did an extensive study on British flora and thereby he became a significant and influential botanist of his period.

🔹Withering was also one of the pioneers in the identification of fungi and devised a Pocket Microscope for his herbalization works.

🔹Moreover, he published a textbook – “A Botanical Arrangement of All the Vegetables Growing in Great Britain” in 1776.

🔹During his research, he came to know about a wise woman called Mrs. Hutton, who was a Folk herbalist and used to prepare the Poly herbal formulated special tea, which seemed to treat the symptoms of Dropsy (Patients with congestive cardiac failure).

🔹In fact, Mrs. Hutton’s special tea contained 20 different herbs, but the one stood out for Withering was Purple Foxglove (Digitalis purpurea).

🔹Subsequently, he experimented with Purple Foxglove for next 10 years. He then extracted a dried, distilled, powdered forms from flowers, leaves and roots for treating Dropsy in 1775.

🔹Furthermore, he proposed that the active ingredient in the Foxglove to be a chemical called Digitalin. He further did the clinical trials on 156 cases and found the Digitalis effects and toxicity. Finally, he concluded that Digitalis really had a curing effect on dropsy.

🔹Based on the result of his investigation, he published “An Account of the Foxglove, and Some of Its Medical Uses” in 1785. In fact, this book has considered a Medical Classic and the digitalis derivatives have won him a spot in the Medical Hall of Fame.

🔹In addition, Withering was one of the first who made a Systematic Study of this Medication, which has produced a profound benefit to a large number of patients till date.