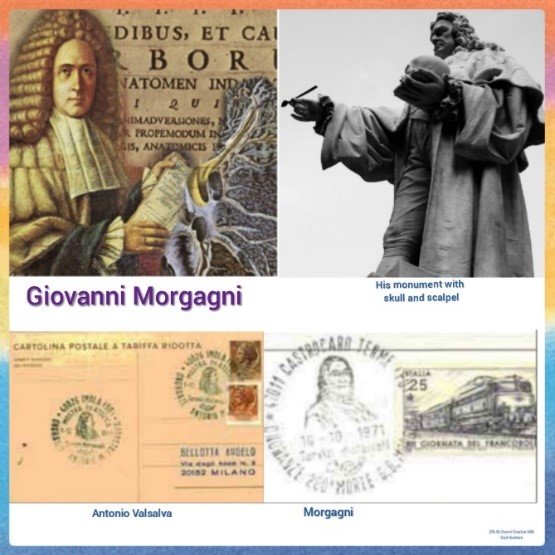 🔹Morgagni studied both Medicine and Philosophy at the University of Bologna in 1701, which is the oldest university in the World – founded in 1088.

🔹After his studies, he worked as an assistant for six years under Antonio Maria Valsalva. He stimulated Morgagni to devote his life to anatomy and pathology.

🔹Morgagni also assisted and gained much experience in preparing Valsalva’s celebrated book The Anatomy and Diseases of the Ear, which was published in 1704.

🔹As Valsalva was transferred, Morgagni took the Anatomical Demonstratorship and extended his significant contributions in the field of anatomy.

🔹Morgagni published his masterpiece after series of fine dissections on human anatomy under the title Adversaria Anatomica in 1706.

🔹Then he became a professor of practical medicine at the famous University of Padua. There he conducted extensive work on correlating clinical symptoms of patients as well as the post-mortem examinations of over 700 cases.

🔹He published the 5 volume book – The Seats and Causes of Disease Investigated by Anatomy in 1761, which contains the results of 60 years of his scientific work.

🔹In his book, he described the terminologies and conditions such as angina pectoris, syphilis aneurysm, rupture of the heart, vegetative endocarditis, pericardial effusion, cyanotic congenital heart disease, mitral stenosis and heart block.

🔹Also, he was the first to describe many of the paediatric pathological conditions such as epispadias, posterior urethral valves, meconium peritonitis, crohn’s disease, coarctation of the aorta, spina bifida, omphalocele….

🔅 Sinus of Morgagni in aorta.

🔅 Morgagni’s foramen – Congenital right-sided fissure in the diaphragm, the site of diaphragmatic hernia.

🔅 Morgagni’s hydatid in the appendix testis.

🔅 Morgagni’s cataract – A hypermature cataract with a softened cortex and a hard nucleus.

🔹A famous saying about Morgagni is… “If all the anatomical findings made by Morgagni should bear his name, probably one third of human body would be called Morgagni’s.”

🔹In fact, Dr. Robert Virchow, “the Father of Modern Pathology,” recognized that Morgagni had introduced modern pathology and thereby created a new era of modern medicine.

The Man Who Laid the Foundation of Modern Medicine