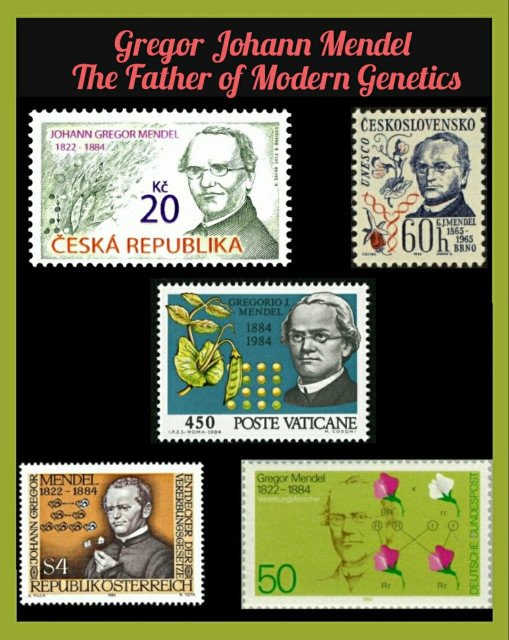 💠Pioneer in the field of Genetics

🔸Johann Mendel was born in a poor farming family in a village in Northern Moravia, Austria (now part of the Czech Republic). During childhood, he spent time and showed a great interest in gardening.

🔸After schooling, he studied philosophy, physics, and mathematics at the University of Olomouc, Czech Republic.

🔸Then he studied and became a monk at the St. Thomas Monastery in Brunn, Austria (now Brno in the Czech Republic). There he gained access to the monastery’s extensive library and experimental facilities.

🔸With the monastery’s support, Mendel further studied natural science at the University of Vienna, Austria.

🔸Upon his return to the monastery in Brno, he served as a monk and as a secondary school teacher till his last days. There he gained the name Gregor as a symbol of his religious life.

🔸During his days, he did many experiments in the monastery garden and studied anatomy, physiology, and the microscopic aspects of many plants.

🔸While spending many hours gardening, one day, he pondered how traits of plants and human beings are inherited from one generation to the next generation. He further wondered why their offsprings are like or unlike their parents?

🔸As he was familiar with plants, he decided to study inheritance by doing experiments on a common pea plant (Pisum sativum), which has numerous distinct opposite characteristics such as:

🔸Mendel spent eight years (from 1856 to 1863) cultivating nearly 28,000 pea plants and crossbreeding the pea plants of opposite characteristics, and observed the offspring. He also systematically recorded how traits were passed on from one generation to the next generation.

🔸 Through the pea plant experiments, Mendel found the phenomenon and coined the terms Dominance & Recessive about certain traits.

🔸Also, he established the many rules of heredity, referred to as Mendelian Inheritance or Mendelian Genetics. They are:

🔸His theory of inheritance was published as “Experiments on Plant Hybridization” in 1866. However, his work was not understood and not appreciated by the scientific community during his lifetime.

🔸Three decades after his death, his work on pea plants was well recognized – it gave birth to Genetics. Thereafter, Mendel has been celebrated as the “Father of Modern Genetics.”

🔸Today, our understanding of traits in plants and human beings, which are inherited through generations comes from the principles proposed by the ingenious researcher Gregor Johann Mendel.

🔸His scientific breakthroughs were carried out in the garden – he proved that science is not done just in the lab.

The Greatest Scientific Biologist of All Time