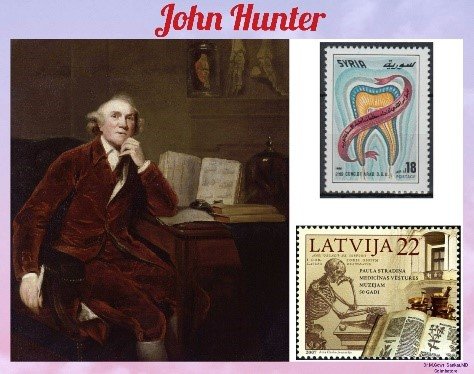 🔸Hunter was born in Scotland as the youngest of ten children.

🔸After his formal education, Hunter moved to London in 1748 at the age of 20 years. There he joined as an assistant to his elder brother William Hunter, who was a famed Anatomist and an Obstetrician.

🔸By the guidance & support of his brother, Hunter learnt human anatomy and acquired skills in the dissection and preparation of specimens. Consequently, he became a Master of Anatomy.

🔸Subsequently, he learned surgery under the eminent surgeons William Cheselden at Chelsea Hospital and from Percival Pott at St. Bartholomew’s Hospital, London.

🔸After his studies, John Hunter began to serve as an army surgeon under British army and spent around three years in France and Portugal. While in service, he developed new ideas on the treatment of gunshot injuries and in venereal disease.

🔸In fact, John Hunter had a passion of collecting anatomical specimens from post-mortem examinations. He collected around 14,000 anatomical specimens of humans and other vertebrates in his lifetime and thereby he became the Masters in Comparative Anatomy. One of his famous specimens was the skeleton of an Eight-Foot-Tall Irish man, Charles Byrne.

🔸Further, he performed many experiments on animals. When the King George III’s elephant died, Hunter performed the first dissection of an elephant.

🔸Many of his specimens are housed in the Hunterian Museum of the Royal College of Surgeons in London.

🔸His contributions to anatomy and surgery were vast. He did experimental research on human teeth and gave the familiar names molar, incisor, cuspid, and bicuspid. Consequently, he is celebrated as a Pioneer in Tooth Transplant and his principles are still used in transplantation of internal organs.

🔸Moreover, he made a detailed study on the structure and function of the lymph vessels, fetal and maternal blood supplies, bone growth and remodelling.

🔸As a teacher, Hunter had a great influence on his students such as Edward Jenner, Astley Cooper and Philip Syng Physick (the Father of American surgery).

🔹His significant publications are:

🔅  A Treatise on the Venereal Disease in 1786 (First text to discuss about venereal disease).

🔅 Observations on Certain Parts of the Animal Oeconomy in 1786.

🔅 A Treatise on the Blood, Inflammation and Gun-shot Wounds in 1794.

🔸Eventually, Hunter was recognized as the most eminent surgeon and the leading teacher of surgery of his time. Today, as we all know, he is remembered as a Founder of Scientific Surgery.

🔸His famous quote… “Don’t Think or Speculate, Try the Experiment” has inspired generations of modern surgeons.