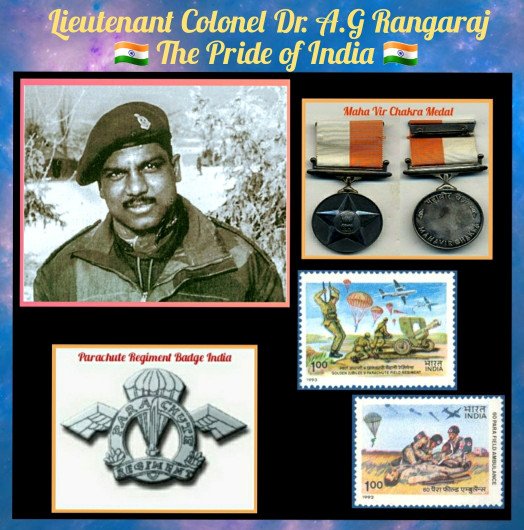 🔹Rangaraj was born in Arcot, Tamil Nadu. He studied medicine at Madras Medical College, Chennai during 1930’s. Then in 1941, he joined Indian Medical Services, which was a military medical service in British ruled India.

🔹After joining the army, Dr. Rangaraj had basic military training in Meerut and was posted in Indian General Hospital at Meerut.

🔹While working, he volunteered for Indian Parachute Unit, a first of its kind in military service. He was given preliminary training by British troops in the Middle East countries for many months and he Pioneered the Parachute Decent successfully.

🔹After his Parachute jump, next day all the newspapers in India carried the headlines Lieut-Col Dr. Rangaraj, the First Paratrooper (military parachutist) of India.

🔹During Second World War, he served in Burma and fought against Japanese Army. Being an Army Medical Officer he took care of the wounded soldiers.

🔹The Government of India, which was under UN, decided not to send military forces, but instead would contribute a medical team as a humanitarian gesture to support UN in Korea.

🔹So the 60th Parachute Field Ambulance Unit of Indian Army was sent to provide medical coverage and Lieut-Col Dr. Rangaraj was the commanding officer of the unit. In fact this was India’s first overseas mission after Independence.

🔹This unit of 346 men, including four surgeons, two anaesthetist and a dentist reached Korea.

🔹The 60th Parachute Field Ambulance was called India’s MASH (Mobile Army Surgical Hospital) Unit. Dr. Rangaraj and his team aided the treatment of the wounded soldiers in the war field.

🔹While the army of United States (US) initiated the largest airborne infiltration during the war (named Operation Tomahawk) against North Korea, Dr. Rangaraj and his team parachuted behind the border lines with US military troops.

🔹He and his team served with dedication under extreme weather conditions and attended the casualties of soldiers.

🔹Indian’s professionalism and non-partisan attitude in the war field earned great respect from UN forces and from the Korean civilian population.

🔹After 3 years of war field service, the medical unit successfully returned to India. The 60 Para Field Ambulance was awarded the President’s Trophy by President Dr. Rajendra Prasad in 1955.

🔹Also, Dr. Rangaraj and three of his unit members were awarded the Chungmu Distinguished Military Service (Meritorious) Award, which is the third-highest award of the Korean military for distinguished service.

🔹Later, Dr. Rangaraj did Diploma in Public Health from Osmania University in 1961 and completed Certificate course in Epidemiology from All India Institute of Medical Sciences (AIIMS), Delhi in 1967.

🔹On the eve of celebration of the 70th anniversary of the Korean War, in the month of July 2020, the South Korean Government Commemorated Lt Col Dr. A. G. Rangaraj by placing his photo in the war memorial and other public places in Korea. He was celebrated as the “Korean War Hero for the Month,” which is a great gesture of gratitude and love expressed by the Korean Government and the Korean people.