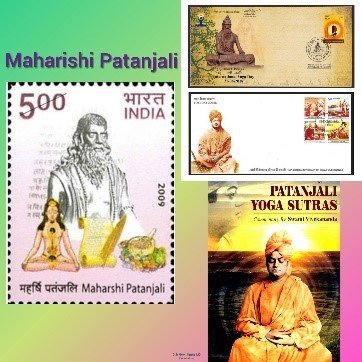 🔹Patanjali is one of the 18 siddhars in the Tamil Saiva siddha tradition.

🔹According to one of the 18 Siddhars, Thirumular’s Thirumurai, a key text of the Tamil Shaiva Siddhanta, holds that Patanjali learned Yoga from the Great Yogic Guru Nandhi Deva.

🔹He authored the treatise entitled Pathanjali’s Yoga sutras. It is a foundation text of classical yoga philosophy which has four sections with 196 sutras. The intention of his yoga-sutras is to set human free from the cage of matter.

🔹He further expressed the yoga in a scientific manner as how to control thought waves. Also, he defines Asana as a steady and comfortable posture for meditation practices.

🔹Subsequently, he described Pranayama, a practice of various breathing techniques and various yoga postures to harmonize the body and mind.

🔹However, the text remained insignificant for many centuries and eventually became well recognized in late 19th century due to the great efforts of Swami Vivekananda. Then it again came to prominence as a comeback classic in the 20th century.

A Renaissance Man of Ancient India