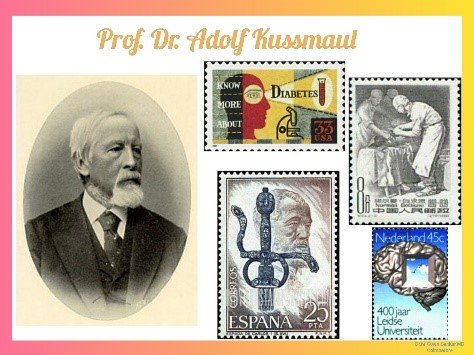 🔹Kussmaul’s father and grandfather were Physicians. During youth, he used to assist his father on his clinical rounds and also in the autopsy room.

🔹He completed his Medical Graduation from the University of Heidelberg in 1845 and then went on to complete his Post graduation from Vienna.

🔹In 1857, he became a Professor of Medicine and had his Professorship at the Universities of Heidelberg, Freiburg and Strassburg.

🔹In 1856, he described that Rigor mortis could be caused by the chemical changes associated with disintegration of muscle.

🔹He was the first to prove that Diabetic coma was caused by Ketosis and he also described about Acidotic breathing.

🔹Moreover, he had shown a special interest in studying patients with reading problems & neurological impairment. After his study, he introduced Word Blindness. This was later named as Dyslexia.

🔹Additionally, Dr. Kussmal published the value of Thoracocentesis about treating Empyema and Pyopneumothorax in 1868.

🔹Once Dr. Kussmaul was watching the famous Sword Swallower Show, where he had noticed how the sword swallower was holding & inserting the sword into his stomach. This surprised him and inspired him to introduce an inflexible tube that could pass into the stomach through oesophagus. Thus, the First Endoscope was developed.

🔹He was the first who performed Esophagoscopy, Gastroscopy and Gastric lavage.

🔹Further, he was the first to describe…

A Physician with Most Creative Mind