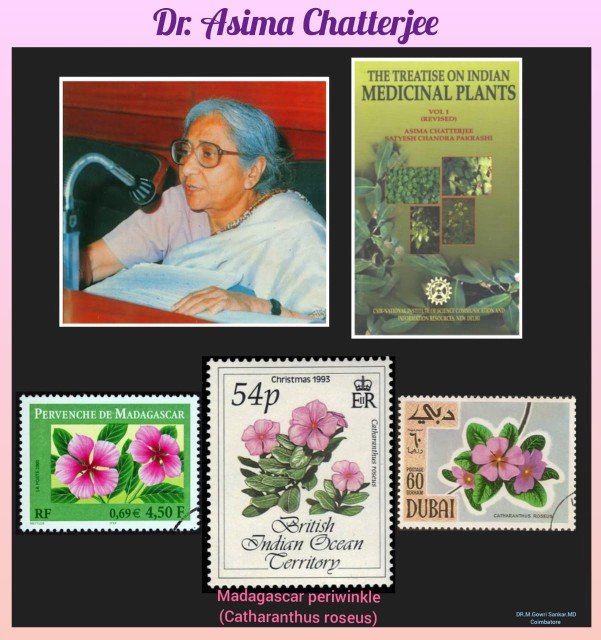 🔹Asima Chatterjee was born in Bengal in 1917. Her father was a physician and an amateur botanist, which stimulated her interest in plant’s healing powers.
🔹In fact, she had interest in the field of botany since childhood and hence, she studied organic chemistry from the Scottish Church College, Calcutta in 1936.
🔹She further did her master’s degree and completed Doctoral degree in Organic chemistry in 1944 from the University of Calcutta under the guidance of P. K. Bose, who was the pioneer natural product chemist in India.
🔹Thereafter, she became the first Indian woman to earn a Doctorate in science from an Indian University.
🔹Dr. Asima also gained research experience from the scientists of America and Switzerland while working in the University of California and Zurich.
🔹For many centuries, plants had been used for their medicinal properties. But the biological mechanisms underpinning these plant’s effects came to limelight only after the investigations of Dr. Asima.
🔹After her relentless research efforts on phytomedicine, she isolated a large number of natural products from many species of plants indigenous to the Indian subcontinent.
🔹Then, she successfully developed an antiepileptic drug named Ayush-56 from Marsilia minuta and also the antimalarial drug named Ayush-64 from native medicinal plants.
🔹Furthermore, she spent around 40 years researching various alkaloid compounds.
🔹Her renowned work on alkaloids made an outstanding contribution on Vinca alkaloids from Madagascar periwinkle plants, which is now widely used as chemotherapeutic agent to slow down the growth of cancer cells.
🔹Additionally, she had published more than 400 research articles on plant medicine in both national and international journals and also compiled The Treatise on Indian Medicinal Plants, which was a six volume book in English.
🔹Finally, Dr. Asima’s work was recognised by universities all over the world. Her phenomenal contributions have won various awards and accolades from all over the world.
🔹Apart from her research, she extended her support for female students throughout her career. In 1940, she established the exclusive Department for Chemistry at Lady Brabourne College, Calcutta.
🔹Actually, she was the first Indian women, who received the Shanti Swarup Bhatnagar Award in chemical science in 1961. She was also honoured with Padma Bhushan Award, which is India’s third highest civilian award, in 1975.
🔹Indeed, she became the first women scientist to get appointed as the President of the Indian Science Congress Association.
🔹Dr. Asima dedicated her whole life to carry out landmark researches in the field of medicinal chemistry. Also, her devoted work in the field of science have paved the way for millions of women to excel in this field.
🔹Her philosophy in life was imbibed in a very strong work ethic – “I wish to work as long as I live.”

A Phenomenal Scientist of India