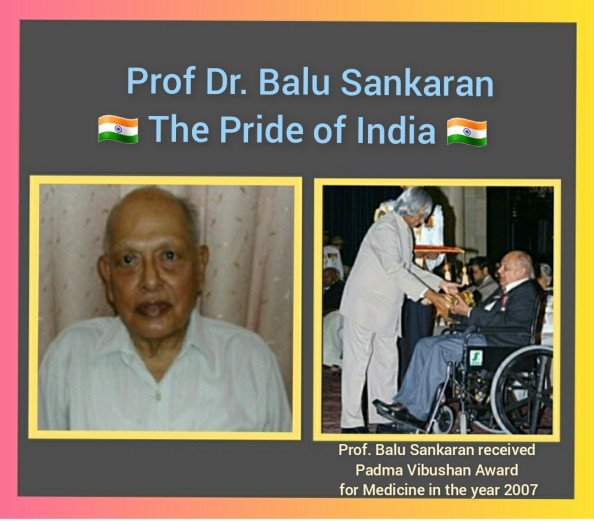 🔹Balu Sankaran was born to a physician’s family in Chennai, Tamil Nadu in the year 1926.
🔹He studied medicine and graduated from Stanley Medical College, Chennai in 1948. He was the recipient of 17 medals while studying and holds many firsts in the University.
🔹Inspired by his uncle Dr. Sankaran also wanted to pursue his post-graduation from abroad. So, he travelled to United States and got trained in orthopedic surgery in the prestigious Columbia Presbyterian Medical Centre, USA. Moreover, he was the first Indian who passed his FRCS (Canada) in orthopedics.
🔹Immediately, he was offered a job at US$ 10,000 per year – An acknowledgement of the depth of his knowledge in orthopedics.
🔹But Dr. Sankaran was very keen to serve his own people in India because there were only 14 orthopedic surgeons in our country at that time.
🔹He further got trained at Manchester Royal Infirmary, UK and fortunately worked with world famous Prof. Sir. John Charley (the founder of modern hip replacement).
🔹In fact, his passion to serve his own people had brought him back to India. Initially, he joined as an Assistant Professor of orthopedic surgery in All India Institute of Medical Sciences in 1956.
🔹During that time, there was no such exclusive ortho ward in AIIMS, which was running in Safturjung Hospital.
🔹At the height of his career VVIPs and VIPs used to come to his OPD for treatment. Even the Prime Minister Indira Gandhi had visited his out patient block for consultation. Dr. Sankaran was well known as poor man’s physician – rendering service to the underprivileged.
🔹Apart from that, he was a wonderful teacher and used to take daily classes for his students at his home from 4.30 am.
🔹Ultimately, he became a giant in the field of orthopedics through his work on reconstruction surgery for leprosy patients and polio-affected children and changed the lives of innumerable patients.
🔹In 1967, he joined as a Professor in Maulana Azad Medical College. Then he became Director of Central Institute of Orthopedics in 1970.
🔹 While, there was a war going on in Bangladesh, the Prime Minister Indira Gandhi sought the advise of Dr. Sankaran for rehabilitation of war victims. He actually witnessed several amputees and realized the need of good orthotics and prosthetics.
🔹Thereby, he became instrumental in setting up the Artificial Limbs Manufacturing Corporation of India (ALIMCO) at Kanpur in 1972 and subsequently established the rehabilitation training center, Institute of Rehabilitation Training and Research at Olaipur, Odhisha.
🔹Furthermore, he established 17 other peripheral rehabilitation centers in the country, which are a testimony to his vision to serve the poor.
🔹Moreover, the WHO appointed him as the Regional Director at Geneva by recognizing his extraordinary contribution. Then he became the Director of WHO in Geneva (1981-1987).
🔹After his retirement, he joined at St. Stephen Hospital, New Delhi, a mission hospital taking care of poor patients and rendered free service for more than a decade. Here he established the wards for paralytic poliomyelitis and cerebral palsy.
🔹Eventually, he was honoured with various awards including Padma Shri award in 1972 and Padma Vibushan award in year 2007 by the Government of India.
🔹Before he left New Delhi for Tamil Nadu, he was given farewell tea at Prime Minister Dr. Manmohan Singh’s house in houour of the recognition for his service.
🔹Dr. Sankaran was recognized as “a born clinical teacher,” because throughout his life he involved himself in teaching students.
🔹His passion for teaching is evident – even during the last days of his life, when his health was deteriorating and he had lost his consciousness, he kept on repeating “Take me to the class, where are the students?”
🔹Dr. Sankaran is well recognized for his humanity, hard work, simplicity and dynamicity. He ultimately achieved his vision by serving as a teacher, a surgeon, a clinician, a scientist and an administrator.

A Vibrant Orthopedic Surgeon of India