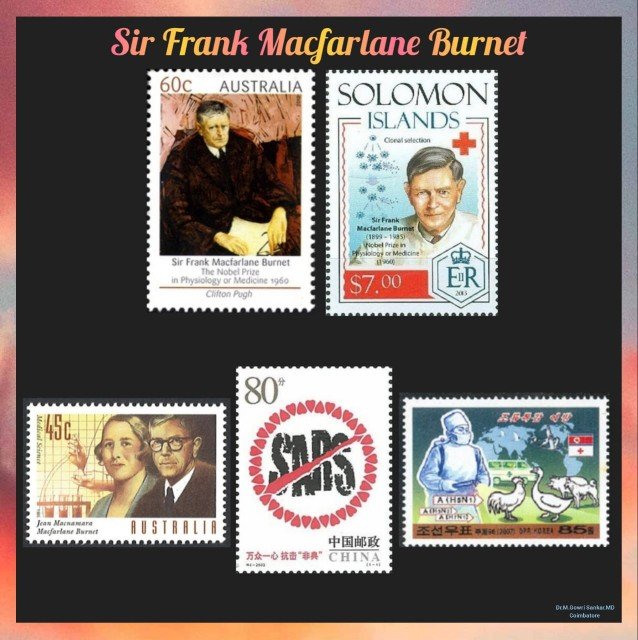 🔹Burnet studied Medicine at the University of Melbourne in 1924. He then earned his Ph.D. from the Lister Institute of Preventive Medicine, London in 1928.
🔹After his studies, he began his research in Microbiology and Immunology at Walter & Eliza Hall Institute of Medical Research, Melbourne. Later, he became a Director of this Institute in 1944.
🔹As he was very curious, his major achievements in microbiology were related to the discovery of Causative agents of Psittacosis and Q-fever.
🔹Moreover, he was the first to isolate a strain of influenza A virus in Australia during 1935. Subsequently, he did marvelous work on serological variations of the influenza virus and on Australian strains of the swine influenza.
🔹He further devised a new technique for cultivating viruses on Chick-embryo. It still serves as the basis for producing vaccines for influenza in the modern times.
🔹Furthermore, he made a landmark discovery in the field of immunology known as Burnet’s clonal selection theory.
🔹In the year 1960, he was honored with shared Nobel Prize in Physiology or Medicine with Sir. Peter Medawar “For the Discovery of Acquired Immunological Tolerance.” Ultimately, this concept directed to the new invention of Tissue transplantation.
🔹He has also published many books such as:
🔅Viruses and Man (1953)
🔅Principles of Animal Virology (1955)
🔅The Clonal Selection Theory of Acquired Immunity (1959)
🔅Immunological Surveillance (1970)
🔅A Scientist Reflects (1979).
🔹Dr. Burnet was deemed the greatest scientist produced by Australia – A man who dedicated sixty years of his life for the development of human science.
🔹Consequently, his experiments had paved new ways for the developments in various field of medicine such as vaccines, transplantation, monoclonal antibody and associated therapies.

A Physician Who Revolutionized the Field of Immunology