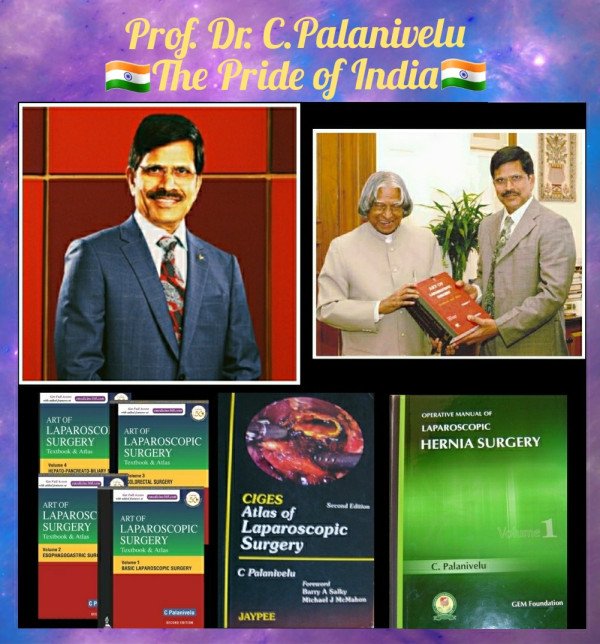 💠Trailblazer in the field of Gastroenterology, Laparoscopy, Bariatric & Robotic Surgery

🔹Palanivelu was born in a poor farmer family in a small village called Avarankattupudur in Namakkal district, Tamil Nadu.

🔹Because of drought in his village and the resulting poverty, his family emigrated to Malaysia. There he worked as a daily-wage labour in a palm oil estate for 5 years.

🔹After returning to India, he was determined to rejoin school and completed his schooling at 21 years of age.

🔹During his young days, his sister died due to pneumonia at the age of 6 years. Due to lack of medical facilities, many villagers were untreated for their diseases and injuries and there were many deaths due to cancer. These painful occurrences forced him to enroll for medicine.

🔹In fact, his dream and willpower led him to overcome all the obstacles of life and finally he stepped in for medical studies at Stanley Medical College, Chennai at the age of 28 years in 1971.

🔹After completing his MS degree in Surgery and Mch in Gastroenterology, he began his medical career at the age of 40 years. Then, he joined as a faculty in Coimbatore Medical College, Coimbatore.

🔹Soon, Dr. Palanivelu turned his attention on minimally invasive gastro-intestinal surgery. In 1991, he started and became the Founder of Coimbatore Institute of Gastrointestinal Endo-Surgery (CIGES).

🔹He revolutionized the field of medicine by inventing many newer laparoscopic techniques such as:

🔅First in the world to perform laparoscopic Whipple operation for cancer pancreas.

🔹Moreover, his artistic key hole laparoscopic surgeries were published as textbooks in the name of

🔹Subsequently, his surgical textbooks were published in various languages, including English, Spanish, Korean and Chinese and have been considered as the Holy books for Laparoscopy. Also, he published about 140 original articles and over 250 research papers.

🔹Further, Prof. Palanivelu has been the

🔅Best Technique Award by International Society for Diseases of Esophagus in 2010.

🔹Prof. Palanivelu often quotes “I have never forgotten where I came from.” He runs the GEM Medical Foundation, a charitable organization, which provides free medical and surgical treatment for poor people and runs a free mobile clinic with the motto – Reach the unreached remote villages.

The Rise of a Farmer’s Son with Scope and Laparoscope

The Beeshmacharya in the Field of Laparoscopic Surgery