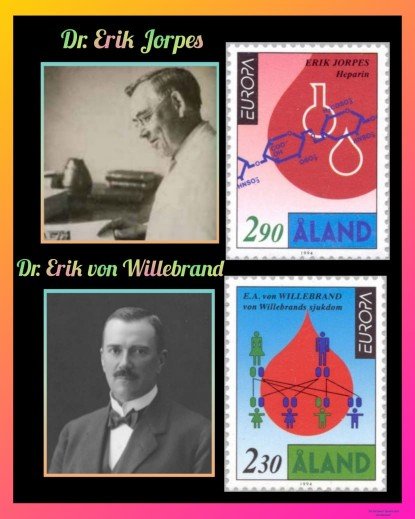 🔸Jorpes was born to a fisherman as the eldest son in Aland Islands, which is located in between Sweden and Finland.
🔸Although he was from poor backround, he was brilliant in his studies. He then enrolled to study medicine at the University of Helsinki, Finland and got his graduation in 1918.
🔸During that time, there was an outbreak of Finnish civil war. In fact, Dr. Jorpes involved himself in local politics and also served in the war by treating the wounded. At that time, Dr. Jorpes and his family members along with thousands of civilians shifted to Soviet Russia as refugees.
🔸After the civil war, Dr. Jorpes settled down in Sweden and continued his medical studies in the Karolinska Institute, Stockholm.
🔸Subsequent to his medical education, he received a scholarship from the Rockefeller Foundation and spent one year in the Rockefeller University, New York City.
🔸He then visited to the University of Toronto, where he studied the preparation of Insulin under the guidance of the Nobel laureates Sir Frederick Banting and Prof. John Macleod.
🔸After returning to Sweden, he got appointed as the Assistant Professor in the Department of Chemistry and Pharmacology. Later, became the Professor of Medical Chemistry at Karolinska Institute.
🔸In fact, Dr. Jorpes had spent most of his time in research activities all over his career. In collaboration with a local pharmaceutical company, he initiated the production of insulin. Actually, his work led to a huge success and the royalties soon made him a multimillionaire.
🔸Further, he did an extensive research in studying the structure and purification of gastrointestinal hormones such as Gastrin, Secretin and Cholecystokinin.
🔸Undoubtedly, he made an important contribution in the field of clinical medicine by pioneering work on heparin.
🔸Moreover, he was the first to demonstrate that heparin was localized in the mast cells of tissues and published his research on the structure of heparin in 1935. Further, he launched the first heparin product for intravenous use in 1936.
🔸After his landmark discovery, Dr. Jorpes collaborated with a Cardiothoracic Surgeon Prof. Clarence Crafoord, at Karolinska Institute and used heparin to prevent postoperative thrombosis. Both succeeded in confirming the usefulness of heparin in treating thrombosis.
🔸Dr. Jorpes was also interested in many different aspects of blood coagulation. Hence, he did his studies on the chemical properties of fibrinogen, factor VIII, plasminogen, prothrombin and thrombin.
🔸By collaborating with his friend Dr. Erik von Willebrand, who was a Finnish hematologist, he conducted an extensive studies on congenital haemorrhagic disease, later named as von Willebrand’s disease.
🔸Ultimately, Dr. Jorpes contributed greatly to the understanding of thrombosis and hemostasis. Though he was born poor, he became a multimillionaire and spent most of his income for scientific research and charity.