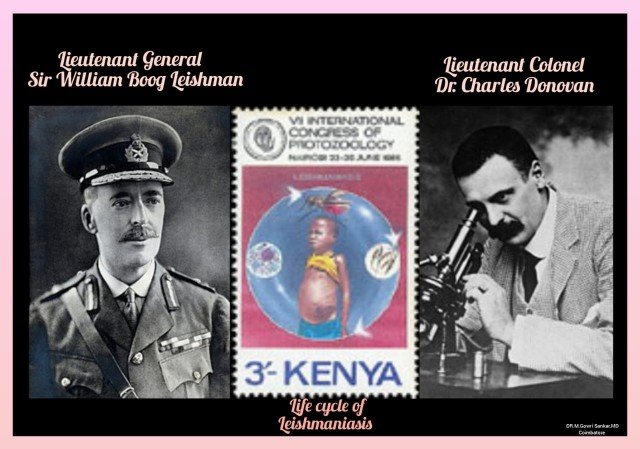 🔹Leishman was born at Glasgow city in Scotland. His father William Leishman was a Professor of Midwifery.
🔹Leishman had his medical studies in University of Glasgow and graduated in 1886.
🔹After completing his studies, he joined in the Army Medical Corps and served as a British Army Medical Officer in India.
🔹While on his service in India, he saw many people were suffering from infectious diseases, which heavily burdened him. So he involved himself in researching on Typhoid fever and Kala-azar. He became the first to identify the causative parasite of Kala-Azar (also known as Dum-dum fever).
🔹He isolated the causative organism by modifying the existing Romanowsky method of staining. He used the compound of methylene blue and eosin, which is known as “Leishman’s stain.”
🔹Furthermore, Leishman had examined the specimens of spleen from many patients who had died by kala azar. He observed Oval bodies and published his observations in 1903.
🔹Simultaneously, Lieutenant Colonel Dr. Charles Donovan, an Indian born-Irish medical officer in the Indian Medical Service independently found the same in kala azar patients. Hence, it was named as “Leishman-Donovan bodies.”
🔹Consequently, Sir Ronald Ross was impressed by the work of Dr. Leishman, so he classified the etiological agent of kala-azar into the separate genus Leishmania. Thereby, Dr. Ross engraved Dr. Leishman’s name into the History of Parasitology.
🔹Later, Dr. Leishman became the Professor of Pathology in the Army Medical School at Millbank, London in the year 1903. There he devoted next ten years of his life to develop the anti-typhoid vaccine.
🔹He also demonstrated the efficacy of anti-typhoid inoculation among army troops during First World War and thereby saved thousands of lives.
🔹Undoubtedly, Dr. Leishman is considered one of the most distinguished Bacteriologist and Pathologist and best known for his performance in military and public health – especially noted for his research on kala-azar and in prevention of typhoid.

An Eminent Physician in Tropical Medicine