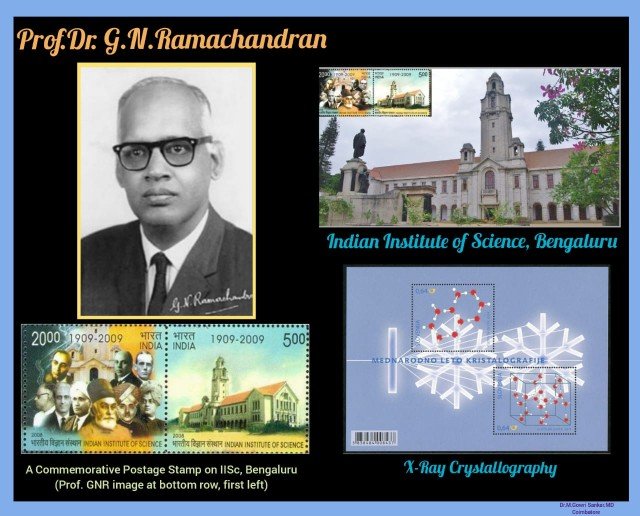 🔹Ramachandran was born and brought up at Ernakulam, Kerala in a Tamil-speaking family. His father was a professor of maths, hence Ramachandran’s interest had grown tremendously in mathematics.
🔹After his schooling, he completed his BSc (Physics) from St. Joseph’s College, Trichy in 1939 and studied Electrical Engineering at Indian Institute of Science, Bangalore in 1942.
🔹At Indian Institute of Science, he got inspired by the Nobel Laureate Sir C.V. Raman, who was the Director of the Institute as well as the HOD of Physics. Under his guidance, Ramachandran did his Masters in Physics from Madras University and also received his Doctoral degree in 1947.
🔹Thereafter, he spent two years at the Cavendish Laboratory in Cambridge, where he earned his second doctoral degree for his studies on X-ray diffuse scattering.
🔹After completion of his studies, he began his career as an Assistant Professor of Physics at the Indian Institute of Science, Bangalore, where he established an X- ray crystallography laboratory.
🔹Later in 1952, he was promoted as the Professor and Head of the Department of Physics in Madras University at the age of 29 years.
🔹In fact, Dr. Ramachandran is considered one of the most brilliant Indian scientists of the 20th century. Also, he made several important discoveries in molecular biophysics, especially in the study of protein structure.
🔹In 1954, he proposed the “Triple helical structure of collagen” by using X-ray diffraction method along with Gopinath Kartha.
🔹Eventually, his work got recognised and published in the Journal Nature in the year 1955. Actually, his discovery became a fundamental in the understanding of peptide structure.
🔹While he was working in Madras University, he was highly supported by Sir Arcot Laksmanaswamy Mudaliar, who was a physician and VC of the University at that time.
🔹Through his support, Prof. Ramachandran did extensive research on various polypeptides and subsequently published two dimensional map on proteins in the Journal of Molecular Biology in 1963.
🔹Now, it is commonly known as the “Ramachandran plot” and moreover it has become a standard description of protein structures in text books.
🔹He established a three dimensional image reconstruction in 1971. His idea was greatly adopted for the development of Computer Assisted Tomography (CT Scan).
🔹Furthermore, he founded two centres of molecular biophysics. The first one was at the University of Madras, Chennai and the second was at the Indian Institute of Science, Bangalore. Later, both became internationally recognised centres for research in molecular biophysics.
🔹Indeed, his extensive research in the field of physics, chemistry and biology had made him to publish more than 250 research articles in well-known National and International journals.
🔹Ultimately, he was honoured with some remarkable awards including:
🔅Shanti Swarup Bhatnagar Award  for Physics in 196.
🔅Jawarharlal Nehru Fellowship in 1968 for research on Protein and Polypeptide Conformation.
🔅Ewald prize from the International Union of Crystallography for his outstanding contributions to crystallography in 1999.
🔹Prof. G. N. Ramachandran is the most outstanding crystallographer, structural biologists and a scientist with Nobel Prize calibre. He did meticulous work in India by following in the footsteps of his mentor Sir C.V. Raman.
🔹In order to honour his devoted contributions in the field of Biological Sciences & Technology, the Council of Scientific and Industrial Research (CSIR) has introduced an award “G N Ramachandran Gold Medal” for the Excellence in Biological Sciences & Technology each year.

A Brilliant Mind With Great Passion for Structural Biology