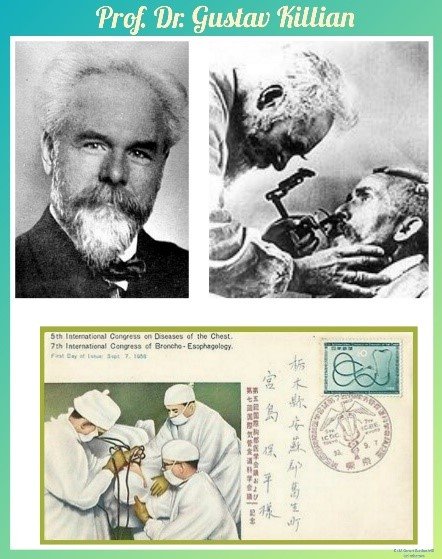 🔹Killian studied medicine at the University of Freiburg, where Dr. Adolf Kussmaul was his teacher. He continued his clinical education at Freiburg, Berlin & Heidelberg. Later he got trained in laryngo-rhinology and started his scientific career in Freiburg.

🔹He was greatly inspired by Dr. Alfred Kirstein, who used the technique of tracheoscopy, a direct visualization of trachea via tracheostomy.

🔹In 1895, Dr. Killian developed bronchoscope and did an experimental work to inspect trachea via tracheostomy and trans laryngeal path by using cocaine as a local anaesthetics.

🔹On March 30, 1897, he succeeded in removing the foreign body in right main bronchus by using the rigid bronchoscope instrument. His rigid bronchoscope was the standard diagnosis and therapeutic procedure for bronchopulmonary diseases for next 70 years.

🔹For the record, he coined the term Direct Bronchoscope.

🔹After his successful publications and lectures, Freiburg became a Mecca for bronchoscopy.

🔹Killian was considered an innovative genius at the forefront of advancement pertaining to ENT surgery in the 20th century:

🔅Devised a Suspension laryngoscope – Used for direct observation of larynx.

🔅 Killians triangle or dehiscence – A triangular week area in the wall of pharynx.

🔹Dr. Chevalier Jackson, the Father of American Bronchoesophagology, dedicated his first text book as – Dedicated to Dr. Gustav Killian – The Father of Bronchoscopy.