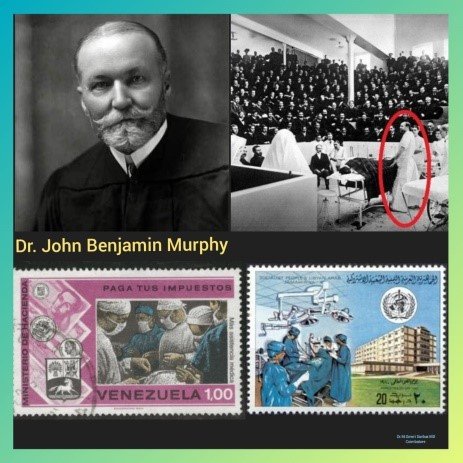 🔸He was actually brought up in a farm house by his parents, who were Irish immigrants.

🔸During his high school days, he got inspired by a local physician and later he started studying medical text books under his guidance and begun to dissect birds and rabbits at his farm.

🔸Then he studied medicine at Rush Medical College, Chicago and graduated in 1879.

🔸After his studies, Dr. Murphy got trained at various institutions in Vienna, Munich, Berlin and Heidelberg. He also spent most of his time working with Pioneer surgeon Dr. Theodor Billroth.

🔅College of Physicians and Surgeons.

🔸In fact, he was an early advocate of appendectomy in cases of appendicitis and also performed many innovative procedures in neurosurgery, orthopaedics, gynaecology, urology, plastic surgery, thoracic surgery, and vascular surgery.

🔅 Murphy’s Test – To elicit rigidity and tenderness in cases of perinephric abscess.

🔅 Murphy’s Drip – Administering ﬂuids by proctoclysis in cases of peritonitis.

🔸Throughout his career Prof. Dr. Murphy was celebrated as a master surgeon, superb clinician, great teacher, brilliant innovator, and a prolific author.