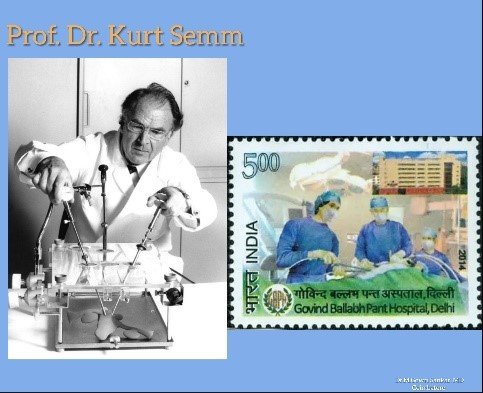 🔸Semm was born in Munich, Germany. He was influenced by his father’s technical work, who was an engineer in a car company.

🔸When he was 16 years old, he was involved in the Second World War and became a Soviet prisoner of war. After his return, he joined to study medicine at the Ludwig-Maximilian University School of Medicine, Munich and later specialized in Gynaecology.

🔸During the early days of his career, he was highly influenced by the publications of Dr. Raoul Palmer, a French Gynaecologist, who was a pioneer in gynaecologic laparoscopy.

🔸Dr. Semm began his service as an assistant and became the chairman of Obstetrics and Gynaecology at the University of Kiel in 1970.

🔸Indeed, he dedicated his whole life to laparoscopy. In early days, he preferred the term “Pelviscopy.“

🔸He further pioneered numerous Gynaecological laparoscopic procedures such as myomectomy, ovariectomy, ovarian cysts resection, adnexectomy, treatment of tubal pregnancy, and many others.

🔸He also invented more than 80 laparoscopic devices such as

🔸Subsequently, he did thousands of improvements to his laparoscopic instruments.

🔸During his early days, Dr. Semm was criticized for his laparoscopic surgeries and his publications were getting rejected. Moreover, complaints kept raising that his technique are unethical.

🔸Once, he was making a slide presentation on ovarian cysts. Suddenly, the projector was unplugged with the explanation that such unethical surgery should never be presented.

🔸Later, Dr. Semm realized that laparoscopic surgery had tremendous potential not only in the field of Gynaecology but also in General Surgery.

🔸On September 13, 1980, Dr. Semm performed the World’s First Fully Laparoscopic Appendectomy. As usual, his attempts to publish on laparoscopic appendectomy were rejected.

🔸At the same time, some German general surgeons trained under Dr. Semm and began conducting surgical laparoscopy on a large scale. During the early 1990, they carried out hundreds of laparoscopic appendectomies and went on to perfect the techniques.

🔸Shortly, thereafter the Laparoscopic revolution broke out, and Dr. Semm’s laparoscopic teachings were in huge demand and his publications on the German language were translated into many languages.

🔸Dr. Semm, during the course of his life, ultimately opened up a New Era of Gynaecologic Surgery and paved a new path in Minimally Invasive Surgery.

An Innovator of Laparoscopic Surgery