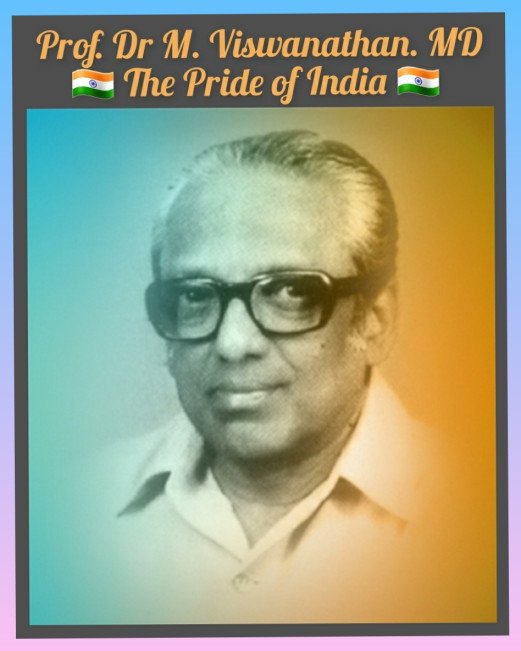 💠Doyen of Diabetology in India

🔹Prof. Dr. Viswanathan was born in a small town called Irinjalakuda in Kerala. When he was 10 yrs of age, he lost his father. He was brought up by his mother, Dr. Madhaviamma, who was one of the first doctors in that small town.

🔹He studied MBBS and MD in General Medicine at Government Stanley Medical College, Chennai in 1940s.

🔹During his college days, he actively participated in the Indian freedom movement by joining Quit India Movement. With patriotism, he also hoisted the Indian tricolour flag in the Stanely Medical College Hostel.

🔹For this act, he was duly expelled from the hostel. At that time, he was well-taken care of and encouraged by his medicine Professor Dr. K. C. Paul, who supported him with food and shelter.

🔹After completing his medical studies, he entered Government Service and joined as Assistant Professor of Medicine at Government Stanley Medical College.

🔹With the support of his mentor Prof. Dr. K. C. Paul, Dr. Viswanathan devoted himself to serve the needy people. In the era of infectious diseases like tuberculosis, he had the foresight that diabetes will going to rule the world. Hence, he started focusing on diabetic patients and managing their complications.

🔹Prof. Viswanathan was the first to start an organized diabetic clinic in India at Stanley Medical College and Hospital in 1948.

🔹In 1954, he started MV Hospital in Chennai exclusively for diabetics.

🔹He became a Professor of Medicine in 1956 at the same institute. After 25 years of Government service, Prof. Viswanathan started a non-profit Organisation the Diabetes Research Centre, Post Graduate Institute for Diabetes and the M.V. Institute for Prevention of diabetes in 1972.

🔹Throughout his career, he was solely devoted to diabetic research. His zeal and dedication took his research centre to new heights.

🔹Soon the centre got recognised by the Indian Council for Medical Research (ICMR) in 1975 and by the Government of India’s Department of Science and Technology and by the World Health Organisation(WHO).

🔹His centre is the first of its kind in India and became World’s finest centre – setting an outstanding example in Diabetic care, Education, Research and Prevention.

🔹In 1988, Prof. Viswanathan initiated the prestigious DRC Gold Medal Oration Award conferred to distinguished scientists in the field of diabetes care and research.

🔹Most of his research projects collaborated with various International research institutes including:

🔅Karolinska Institute, Sweden and other leading research centres in the US and Australia.

🔹In addition, he took up a mega research project entitled “Primary Prevention of Diabetes.” In this he had collected over 35,000 family registries.

🔹Further, he started a separate free clinic in his mother’s name Dr. Madhaviamma Clinic exclusively for diabetic patients, where free investigations were done and drugs and insulin was distributed for free of cost to the needy patients.

🔹To benefit the rural population, Prof Viswanathan trained hundreds of doctors to set up diabetic clinics, which was his biggest achievement.

🔹As an academician, he published more than 250 peer-reviewed research papers and articles in various prestigious National and International Journals.

🔹During his illustrious career, he lead various organisations including the Association of Physicians of India (API) as President in 1981-82. His exemplary service in the field of diabetology was honoured with several awards including:

🔅Charles Morseman Diabetes Endocrine Lecturer Award from the University of Nebraska, US.

🔹In order to honour his immense service in diabetology, the Research Society for the Study of Diabetes in India (RSSDI) and the Tamil Nadu API introduced “Prof. M. Viswanathan Oration.”

🔹 In fact, he had four great ambitions in his lifetime…

🔅 First ambition – Every diabetic patient should be helped to live his normal span of life in perfect health.

🔅 Second ambition – To establish diabetology as a medical discipline in our country.

🔅 Third ambition – Indian physicians should focus on the highest quality research on diabetics and it should have an international recognition.

🔅 Fourth ambition – Diabetes should be prevented and conquered.

🔹Of course, he had witnessed three of his ambitions in his lifetime, today we are marching towards his fourth ambition by his legacy.

🔹Prof. Viswanathan was undoubtedly an excellent physician, teacher par excellence, researcher and philanthropist. Apart from that, he was a man of humanity and an epitome for generation-to-generation physicians.

A Visionary & The Father of Diabetology in India

A Stalwart in Diabetology & Endocrinology