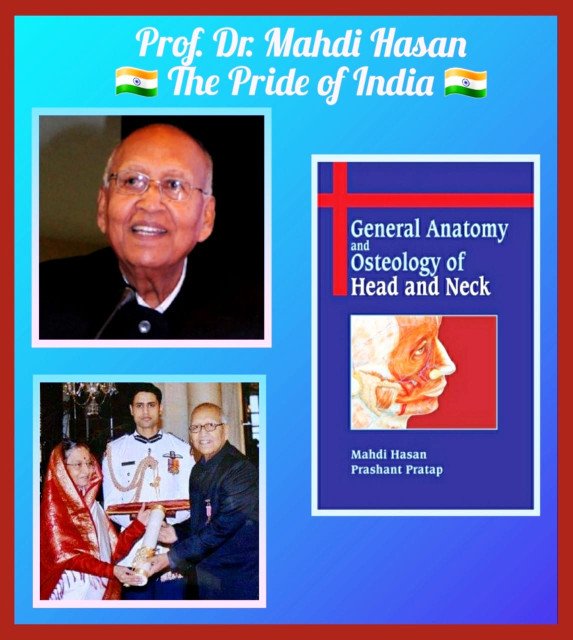 🔹Hasan was born at Gadayan in Uttar Pradesh. Unfortunately, he lost his father when he was four years old, so he was raised by his brothers.

🔹Hasan studied medicine at King George Medical College in Lucknow. After his graduation, he began his career as a Demonstrator in the Department of Anatomy in 1958. Then he got the MS in Anatomy from the same institute.

🔹After his post-graduate studies, he moved to Jawaharlal Nehru Medical College, Aligarh, where he spent 30 years of his life – till retirement.

🔹He travelled to Germany and learned Electron Microscopy Techniques and also studied Gerontology at the University of Gottingen in 1965.

🔹Then he became a Prominent Indian Anatomist with academic career spanning of 55 years and he was well-known for giving new orientation in Teaching of Anatomy.

🔹 Dr. Hasan holds many firsts in India to his credit:

🔅First in India, to have obtained MS with honours in Anatomy as well as Ph.D. and Doctor of Science (D.Sc.).

🔅First Anatomist of India to have learnt Electron microscopy and studied Gerontology.

🔅First and only Indian Anatomist to be chosen a Fellow of Alexander von-Humboldt Foundation, Germany.

🔅First Indian Anatomist, to be appointed as an Adviser in Neurotoxicology by World Health Organisation (WHO), Geneva.

🔅First and only Indian Anatomist to be appointed as a member of the Governing Body of ICMR and as a Chairman of the Medical Committee of the Indian Red Cross.

🔹Moreover, he pioneered in Brain research and established the First Interdisciplinary Brain Research Centre in Aligarh in 1977 and Indian Academy of Neurosciences at Aligarh in 1983.

🔹His ground-breaking works are as follows…

🔅He discovered a new technique in staining zinc in brain tissue section.

🔅He was the first to demonstrate Ultrastructural Classification of Synapses in Lateral Geniculate Body (Integrative centre of visual pathway).

🔅Also, he demonstrated the vacuolar degeneration of neurons for the first time in the lateral geniculate body of the monkeys.

🔅Furthermore, he did an extensive research in the role of Lipofuscin (age pigment) in Neuronal Aging and Diseases.

🔅Besides, he was the first to report the Single cord Brachial Plexus in India (second report in the world).

🔹Additionally, he published around 5 books, 7 book chapters, and more than 135 original research papers and earned 660 citations in various International journals and 38 reference books including Gray’s Anatomy.

🔹He was globally recognized for his teaching skills and served as visiting Professor at many medical colleges in Germany, Iran, Dubai, Libya and China.

🔹In fact, his commitment and dedication were very much proved in the last 6 month of his life. He was seriously ill, yet he worked and published the book on Treacher collins syndrome.

🔹He was indeed an excellent teacher, researcher with social concerns and commitments in environmental pollution, pesticide toxicity and metal neurotoxicity.

🔹Further, He was honoured with many awards including Dr. B. C. Roy National Award (in the category of Eminent Medical Teacher) in 1992 and Padma Shri Award from Government of India in 2012.

🔹The Anatomical Society of India has introduced Dr. Mahdi Hasan Memorial Gold Medal every year since 1989 for the best paper in the field of Clinical Anatomy.